There's no way to use a single animation instance blueprint with multiple skeletons, right?

So there’s no way around this right? If I have 3 different skeletons, I need 3 different sets of the same animations and 3 different animation blueprints? I keep seeing stuff about using rigs but that’s just to help with the retargeting I think… then I see “control rig” which seems to be something else entirely. And I’m having a tough time getting a yes or no answer here… if that’s what I gotta do, that’s what I gotta do. But I wanna cover my bases before wasting time.

the best way is to have a core skeleton that is exactly the same and any additional skeletons will just ADD bones without altering the core structure.

you could also bring all of the 3 skeletos into 1 file, merge the bone structures as appropriate and import an FBX with said skeleton/mesh.
toss the mesh, keep the skeleton. Use the skeleton on the import for the different meshes you already have.

The animations should then still work, the bones with no tracks should just sit there unutilized.
Its messy, to be sure, but it does make it so you can run one animBP only.
its what youd do for morphing characters if you didnt want to swap the asset…

If the bone names are the same you just import but select the base skeleton. Then they are on the same one. Animation Retargeting | Unreal Engine Documentation

If the bone names are the same you just import but select the base skeleton. Then they are on the same one. Animation Retargeting | Unreal Engine Documentation

I never got a clear answer about this. When you re-target an animation, it will always have to duplicate it to point to a new skeleton right? You can’t have a single animation (literally a single asset, no duplicates) work for multiple skeletons?

Correct. But one skeleton can work with infinite meshes.

Yeah, the way I have it set up right now is I have a base skeleton and I just import everything with that skeleton selected. Then you have to make sure the skeleton retargeting settings are right as in the link I gave, but I never have to actually tell it to retarget. 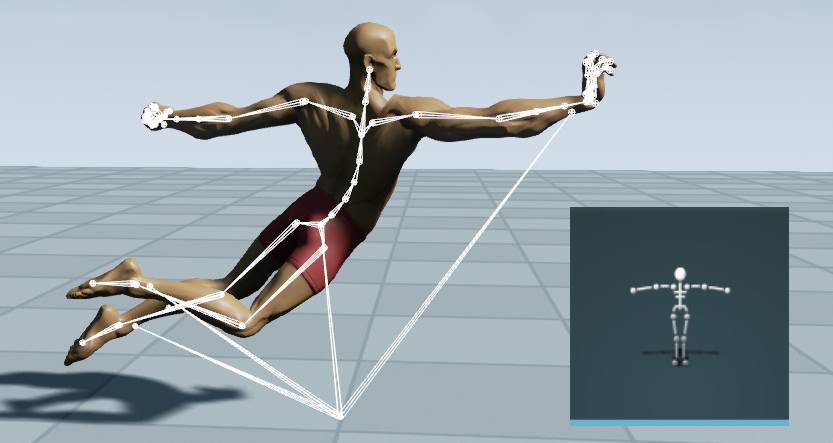 An overview of the Skeleton asset and how it applies to animation in UE4.

Follow the examples the base hierarchy “has” to be the same but children can be added as to functionality, say adding a duster jacket, and will accept animations as to the additional bones.

Where the depends comes in is in the purpose that needs to be served, with in context, and in general the answer is usually no with out knowing the relative positions and references being made to the additional skeletal assets.

A good example of this practice in use is the Paragon examples that shares the same base Epic rig, that at one point shared the same base hierarchy, but with each character requiring additional bones to accommodate unique requirements like weapons and such. You can test this in theory by by setting up a 3rd person template, add the Paragon character to project, and then change the skeletal reference to the 3rd person version. The targeting to the new reference will take place but UE4 will respond that there are additional bones required and if you want to included them.

Do the same process to all of the Paragon assets and you will now have over 3000 animation assets targeted to the base third person rig, along with unique requirements, back to what I would assume is Paragon’s original character model structure.

Some notes on the auto-rig.

An interesting feature addition but I’m hard press to see any situation where such level of control is required. The idea of animating in UE4 for the purpose of game play seems rather redundant consider there are far better tools for the purpose of authoring animations that equals the same level of learning to build a rigging system to drive a single need purpose. My weapon of choice for example is Motionbuilder so tasks like targeting and re-targeting is a task best done over a cup of coffee and and donuts as this is a key feature of MB as to the need.

Once a character in MB is characterized MB becomes object aware that the character in hand is a biped character so access to and activation of tool sets available to such an object becomes activated, including a “Control Rig” that can be used to drive all of the animations, so I’m thinking Epic is in the process of a system where a single channel system could be applied, as a one rig to serve them all, that will forgo the need to re-target in the first place.