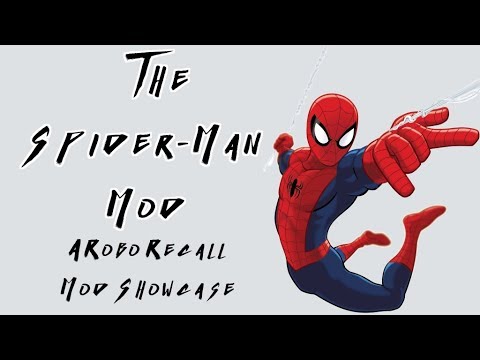 I’ve always been super inspired by VR grappling hook games, the way that they can zip you or swing you so easily through levels, it’s an absolute blast, and I thought Robo Recall deserved some of that glory! Not to mention, I mean, everyone loves Spider-man, right?

Ok, so welcome to the spider-man mod! I have most of it figured out, just a few more kinks for the web-zipping (the first feature) and then I move on to web-swinging! I have to figure out a way for the hands to know if the other is grappling so I can move the player to the middle of both next, but here’s the features for now:

Rework V4 (A&B) -**
Rework Version 4 type A and B feature zipping on both hands now! Also, type B uses a symbiote spiderman skin, rather than the usual iron spider skin!

Totally forgot to add this before, but with the newest two versions, if you hit the top controller button while grappled to a wall (Y or B depending on which hand is grappling) you can lock yourself onto that wall, in order to pick up the revolvers and shoot at enemies. This will include all the weapons eventually, but the revolver is currently the only weapon with custom trigger code, so it’s the only weapon that fires normally right now. anyway, once locked to the wall, just click Y or B again (again, based on which hand is attached) to release and jump off the wall!

Rework V2 -
Rework version 2 is just a slight change… the hands are now textured to look like Iron Spider hands! Worked for 2-3 hours on retexturing the hands, hope you like it!

**Rework V1 - **
Rework version 1 is where I really begin to bring the webs together. Firstly, this mod is now a player pawn only mod. Meaning that it won’t require you to hold a weapon to web-zip. (Web zip not yet working) secondly, I figured out how to retexture the hands! Now I just need to make a new texture for them. More importantly, I’m beginning the implimentation of an optional toggle-able web-zip feature built right into the gloves, rather than in a weapon, meaning you can web zip while holding a revolver or any other mod weapon. More on that soon!

Version 2 -
Although the mod is officially named the Spider-man Mod, currently the mod in-game is called the GrappleGun mod, so you’ll have to select that when you want to use it. Step turning is still built in, like last time, so no need to use the Step-Turn mod! Web-zipping now works! Aim and shoot the pistol to thwip out a web line and zip toward it! The web-zip currently only works when the gun is held in the left hand. The right hand makes the webs attach to you, which essentially breaks physics and lets you jump infinitely. xD I’ll try and fix that in the next release.

V2 also releases the Test Map, a fun place you can go to to try out your web swinging in safety before going into the real rr levels (also, because of collision geometry, some parts of the maps don’t currently work well with the Spider-man Mod (aka self-zipping in midair for no reason).

**Version 1 - **
Version 1 is the initial release! Not fully functioning the way I wanted it to, but still fun to mess around with nonetheless! Also, this mod features a version of the step-turn mod integrated into it, so no need to enable the actual Step Turn mod to use this! (I had to do this in order for rope swinging to work in the future.)