The Solus Project - Learn UE4 using content from Solus and what I’ve learned from a year of working in UE4, and three commercial UE4 projects.

About 12 hours worth of video, example content from our UE4 game. The videos continue on my UE4 presentation at the Swedish Game Awards from March the 8 this year, and aim to give you an overview on how to approach bigger projects in UE4, and all the cool stuff you can pull off. 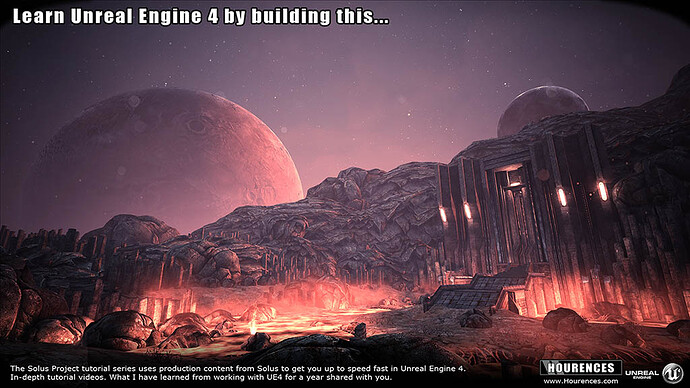 Preview The Solus Project - Level Introduction - YouTube
Using the modular and easy to use modular environment assets from Solus, this video introduces you to everything you need to know to build basic environments in Unreal Engine 4. Besides covering how to build environments using modular meshes, the video also goes over how to create a landscape, apply foliage, how to best apply the UE4 reflection system, lighting and its performance considerations, and how to keep track and organize your levels.

Preview The Solus Project - Blueprint Introduction - YouTube
Starting from the basics, and building upon the free Solus Example project, this beginners video starts off by talking you through creating a door for Solus. First one that is set up in the level, then one that is set up in a separate Blueprint. Following that you will be building a pressure plate to control the door, and following that the video covers how to build a basic item system. Detecting, highlighting, and picking up rocks in the world, and place them on the pressure plate to keep the door open permanently.

Preview The Solus Project - Blueprint Continued 1 - YouTube
Continues upon the Blueprint Introduction video. Using the same content and the Blueprint scripts set up in that introduction video, this video steps it up a couple of notches. This advanced video dives deeper into Blueprint and touches on topics such as Macros, Functions, Arrays, and complex networks.
The eventual outcome of this video is having a player who can take damage, die, respawn, enable checkpoints, pick up and switch between multiple items, and who can combine a pipe with branches and fire to create a torch.

Thanks for these ! Funny how I went to your site for UE3 training and now it comes around again for ue4. Not to mention Torlan had me addicted to UT for months. Epic.

Thank you so much, Hourences. So immense! You and Rama have been hard at work for sure! <3

Incredible!
Thank you for sharing this.

This is an incredible contribution - time to set aside 12 hours. Thank you so much, Hourences!

Wow, this is amazing. Thank you for this!

Once again Sjoerd - amazing work and great gift to the community.
You’re a legend in Unreal technology

Thank you sir. Watched all three Intro Parts. Gonna buy it next week

The textures makes it look outdated.

Hey Errvald, where’s a link to your project? I’d love to see your textures.

thanks alot people, inspiration to education!

Always been a fan of your tutorials, think I own all of them you did with Eat3D. Thanks for this great resource.

Thank you so much, Hourences. So immense! You and Rama have been hard at work for sure! <3

Looks good… think I will have to buy them

I just wanted to say that you and Rama have put together quite an amazing piece and your tutorials are top notch, Hourences.