I just wanted to share some of my progress on my project. A few years ago I created ‘The Solar System: Explore your Backyard’. you can see a video of it here. 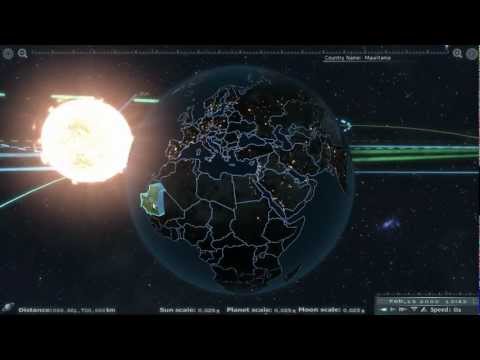 This was created in UDK, but I have been working on re-creating it using UE4 for the past 6 months or so. Like any project, the ‘guts’ aren’t really seen. I spent most of my time working on getting everything as accurate as possible with the orientations, orbits, scales, speeds and trickier details like programming in a calendar which accounts for things like leap years. (All done via Blueprint)

Here are a few shots of what it looks like so far.

(Just a close up shot of the sun and planets scaled up for easier viewing.)

(Each planet will have the orbiting paths of each moon, their model, and you’ll be able to focus on them with information displayed to the right)

(This is a shot of Earths cross section. Each of the major planets will have this, and even some of the moons if there is enough information on them.)

(Here is a WIP of Earths capitals.)

(Here is the ‘orbital height’ option. It shows the height the planets take in relation to the earths orbit to the sun.)

(Here you can see the corkscrew path that the planets are taking as they pass through our milky way.)

(When selecting planets, anywhere you put your mouse over, the orbital paths will highlight making them easier to see from a distance.)

(I am trying to give as much control over the visuals of the project. Toggling names, scales, orbital paths… anything that will impact the experience in a positive way, I’m trying to include.)

(And lastly, the gravitational wells. As each planet passes over the grid, the grid will dip down visualizing the gravity in that area. As with everything, information for the planets gravity will be provided on the far right)

Not everything is in place quite yet, the ‘capitals’ for example are incomplete (so not everything’s in yet), but it’s coming along nicely!

I focused on the functionality, feel and accuracy of everything as much as I could. I am trying to get the user experience feeling right so it feels less like a ‘game’.

I am basically working on getting the project (feature wise) to match the previous version, then I’ll be adding in some nice details on top of it to really make it shine.

I have a list of things I’ll like to add to the project, but I’m always open for any suggestions. If you guys like the project and want to see a certain feature, drop me a line and I’ll make a note. Maybe it’ll make it in!

Please continue with this project, its very intriguing.

Here is a video of the updated Alpha version that I’ve been working on. Hope you all enjoy!

Great work. How you made orbits? I had serious trouble to make them visible from any distance.

I had some troubles setting up the orbits as well. I ended up going with two flat planes at right angles to one another, and did some fancy material work to mask out the surrounding areas that I don’t want to be visible. I controlled that through the geometry using the Alpha vertex channel.

Here you can see the default geometry I used.

And here you can see the same geometry in the game, and the in game render at the same angle. I exaggerated the material to help make the effect more noticeable. As you can see, the shader allows for more of the masked area to show the further away the camera gets. I took advantage of the Vertex Alpha Colors I set, mixed with some calculations done with the PixelDepth node in the material shader.

I actually remember the original I think. Super great to see you revamp this. Looks fantastic!

Most awesome!! I’ve been wanting to learn how to do this for a dream project of mine… Any chance you would make a tutorial? Heck, I would pay for a galaxy creation system tutorial if you posted on udemy!! Keep up the great work…

Hey Teak421, thanks for dropping the ‘Udemy’ name in the post! One of the plans I have for this project once it’s finished and available to everyone is to create tutorials about how it was created, start to finish. However, I wasn’t too sure who to go through for this since I don’t want them to be strictly text based like the ones on my site currently are. Udemy looks like it might be a great option for me. Thanks again.

Hey Teak421, thanks for dropping the ‘Udemy’ name in the post! One of the plans I have for this project once it’s finished and available to everyone is to create tutorials about how it was created, start to finish. However, I wasn’t too sure who to go through for this since I don’t want them to be strictly text based like the ones on my site currently are. Udemy looks like it might be a great option for me. Thanks again.

Perfect! Please let me know when you are ready to roll on that… I’m sure it will be awhile, its not something you could just pop out. Anyway, send me a PM when you are close. Take Care!

Why is the sun so small? Was that just so that you didn’t have to zoom in a ton on the planets?

There is a scaling system in place for the planets, the sun and the moons. When you first load the program everything is to scale, but an option exists to scale things up for easier viewing when seen from far away. The planets scale up 2500x their original size which gives a nice average over all, however if I were to scale the sun up that much it would take over everything in the solar system. So when the sun is scaled up, it is only by 25x. There is a scaling readout in the lower left hand corner of the screen for reference.