Hi!
I would like to share with you my first game made in UE4.
The goal of this project was to learn the Unreal engine, so I didn’t focus on audio-visual freaks. I will boast about these in the next game.
As for the game, we have a little story here, a lot of shooting, running, a little bit of thinking, there is also a simple multiplayer.
It’s no game of the year of course, but it’s self-made and it works

and that’s why I’m proud of it.
Soon I will upload it online and in the meantime I present to you a fragment of gameplay.

The game is difficult and due to my outstanding FPS skills - I recorded gameplay in “godmode” in which I have a set of weapons, a lot of ammunition, armor, etc.
Enjoy 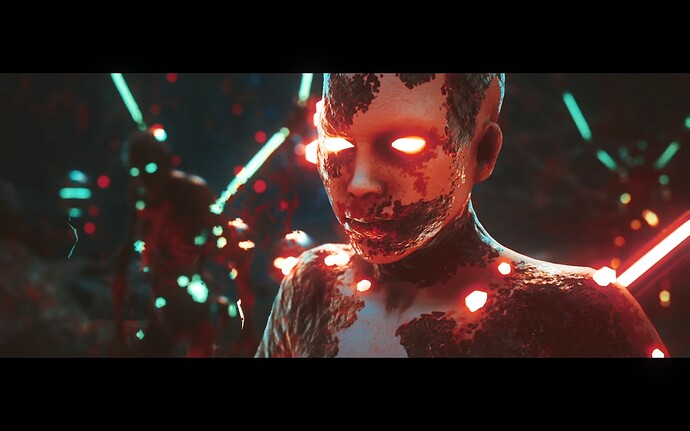 I think you’ve unlocked a new fear for me. As a long time zombie-phobic (totally a real thing and not something I’ve just made up) I was both terrified and intrigued at KillBox. Cyborg zombies aren’t something I EVER wanted to see but now that I have, its spook-tacular in the best way! My personal fears aside, this is a terrific display of skill and environment creation. So genuinely impressive.

Hope you keep up the phenomenal work and keep sharing your expertise and passion with us.
Looking forward to your next project and sending lots of support your way!

Ladies and gentlemens, maybe you have some comments on what to change or improve. Everything can still be changed.

And here are some additional pictures. 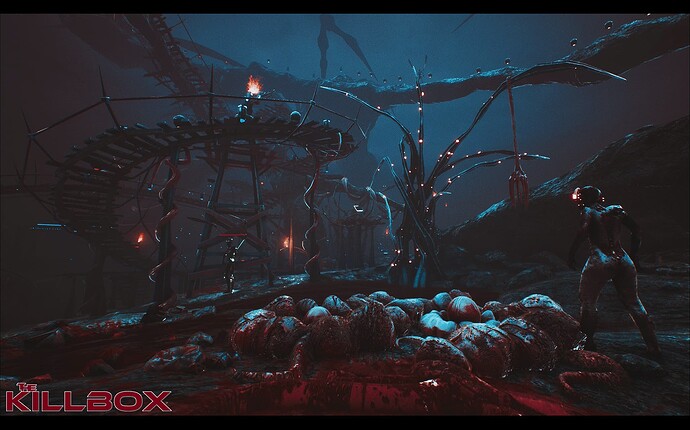 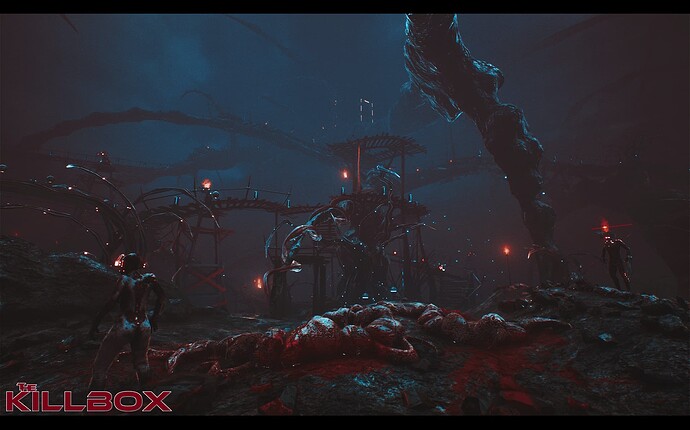 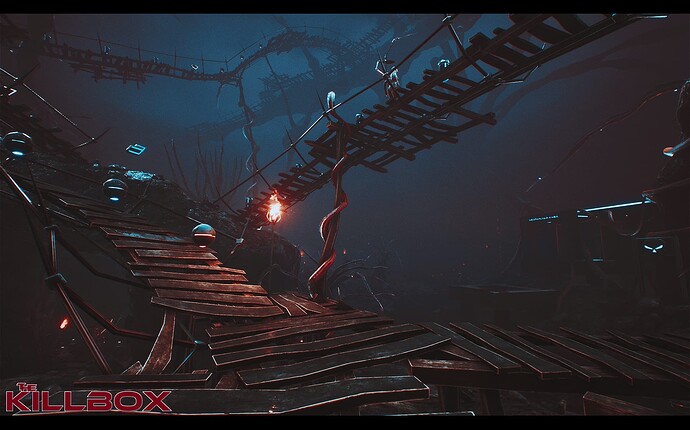 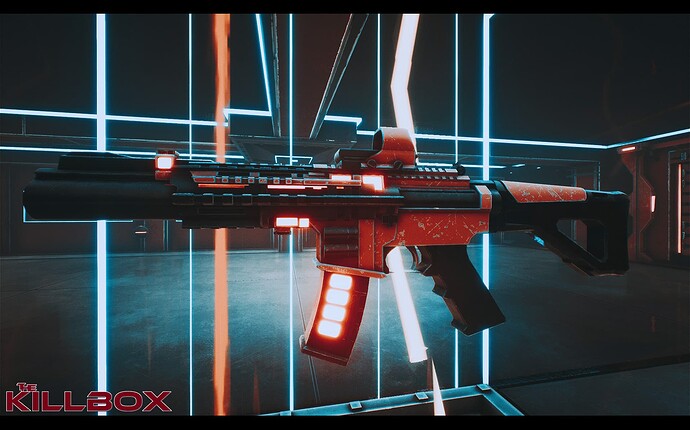 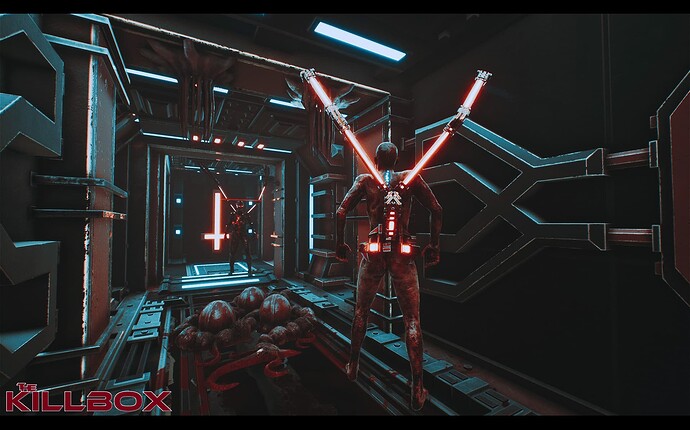 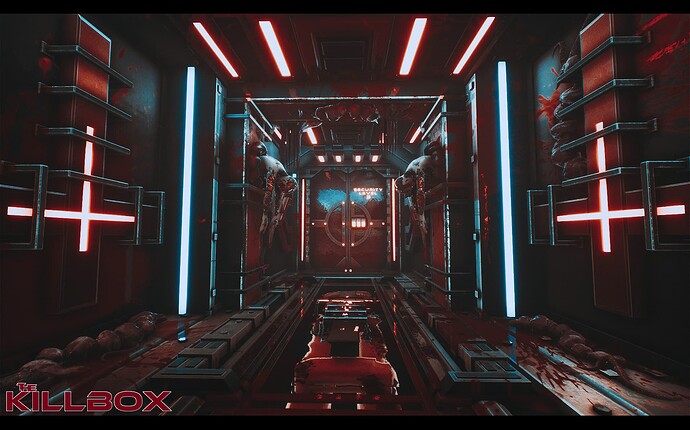 Your game does not look like a first! It seams feature rich and „finished“ to a point where it is hard to tell if it was don by a individual or a small team.

For deeper feedback i would love to play it!

The things i saw in the video:

How many years have you learned UE? How long did you develop this game?

I love your work! Keep going! If you wish so, i would love to be a beta tester before the release.

I confirm - this is my first game.
It wasn’t difficult, considering the amount of tutorials (the YT content authors are doing a fantastic job!) and of course, Google.

I know 3D techniques, so I focused mainly on BP.

The whole thing was to be as coherent as possible and based on objects that, initially being a test, I turned into what is now.
Interesting fact. In the first version of the game, there were only holes in the ground instead of bases, and the opponents (one type) were defeated with rocks with “destruction” and you scored a point.

Are the animations smooth? - generally yes;), but also maybe I’m not a master at grabbing games.

Weapons.
This is probably my favorite topic of the last time and I can see that I will have to really look at it.

I learned Unreal Engine very irregularly (between my other projects) and the game was created in about 1.5 years, but sometimes I did not touch it for months, so it is difficult to estimate.

Thank you, I think it is doable (beta tester)

@sinclar , this is very much giving, “You’re the Dr. Frankenstein of zombies!” Your innovative take on the undead is “Unreal”! LOL! But seriously, it’s visionary! This gameplay is what happens when The Suffering meets Zombieland meets Black Summer with a splash of Stranger Things. I’m totally jamming out to some White Zombie heavily anticipating your next reveal! What were your greatest inspirations for this project? What are your top three zombie movies?

Thank you for those words, they improved my mood.
What are my favorite zombie movies? I grew up on horror movies and I think I’m addicted to them, I even watch them to sleep, although this confession is a bit spooky :).
I like so many horror movies that picking 3 is very, very difficult, but I will try.
28 days (and weeks) later (for crazy zombies and music), Doom (for characters and SF atmosphere), Braindead (funny and hideous), Night of the Living Dead (classic), Land of the dead (I just like it), I Am Legend (for everything), The evil dead (my first horror film in which I was simultaneously terrified and delighted), Dead snow (nazi-zombi), Shaun of the Dead (for the realizations and I like these actors), Resident Evil (for Jovovich and a room with lasers), Re-Animator (for the atmosphere of VHS films), REC (for the peculiar approach to making horror films), I often come back to The Thing (also remake) … ok, I got a little more than 3, but believe me I could write like that all day long.

@sinclar What in the Unholy Walking Dead?! A fellow zombie and horror enthusiast?! I “DEAD-icate” my heart to you after reading your mention of Re-Animator and REC! Totally love those movies! They’re so niche that not a lot of people discuss them! I’ve seen almost everything you’ve listed! Shaun of the Dead was hilarious for all the right reasons!

Seeing as how you’re such a qualified zombie-ist, are you going to incorporate your fervent love of zombie lore into The Killbox? Do you have a favorite zombie inspired video game?

Have you seen Soul Station (anime)? Speaking of Soul Station, what’s your take on Train to Busan, Train to Busan 2, REC 2, One Cut of the Dead, and/or Warm Bodies? I pity the “ghoul” that hasn’t seen these movies! LOL! Can’t wait to hear your take and anticipating your next game reveal!