The game always spawns the default character even when I selected a different one. How to I fix this? 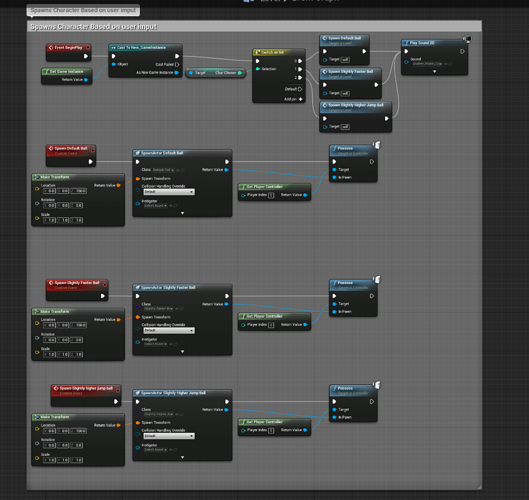 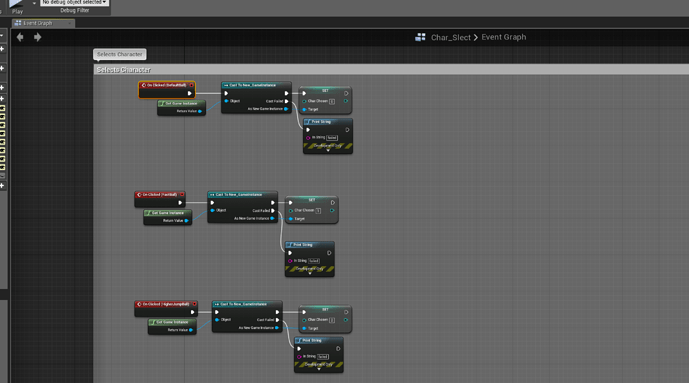 Are there any pawns in the level with auto posses turned on? Or a game mode set in world settings with a default pawn class?

The issue is most likely in your Event BeginPlay. You are spawning in the character based on your int as soon as the widget is spawned in. Change the BeginPlay event to a custom event that you call when one of your character selection buttons is pressed to change the int before you spawn in a character.

EDIT: To test if this is the issue try changing the default value of CharChosen and see if a different character is spawned in.

The Character Select screen is in the main menu, so it’s before the level is even loaded. And the game mode is set to none for the character

Try adding print statements 1) where you set the int and 2) where the switch is called. In both places have it print the int value. This should tell you whether the issue is with the set or get functions. Lmk what you find out!

So I tested what you said and on my character select screen, it seems that the only button that seems to work is the first one which is why it’s spawning only spawning in the default ball. I’m going to to try resetting the buttons on clicked event and see if that fixes the issue.

So it seems that I just needed to reset the on clicked event for each of the buttons, Thank you so much for your help its much appreciated. I’m going to mark this answered unless something else happens to come up with the character selection screen again.

Great to hear this is fixed! Glad to help