During another Corona lockdown I started this project with the following goals in mind:

So the start was to create a cute little drone, which is set up to be flexible for further gameplay mechanics down the road. To archieve this, I gave him a loading space that can be used for cargo, adding machinery, or many more ideas.
Also I prepared several surfaces on the drone to (optionally) have different material slots. By doing this, I have the options per surface in the game… 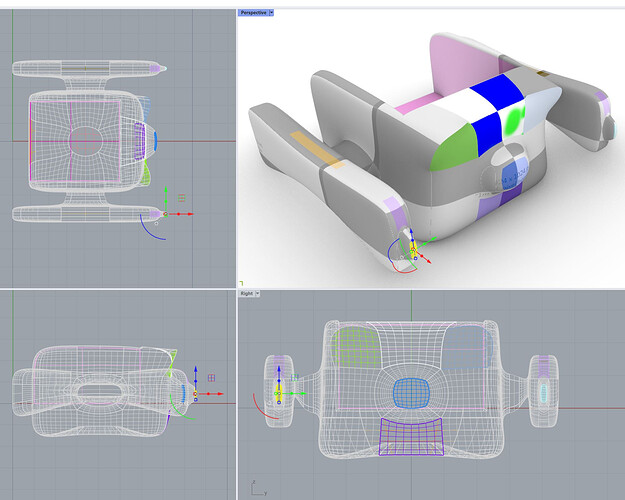 Here some examples for the different surface materials: 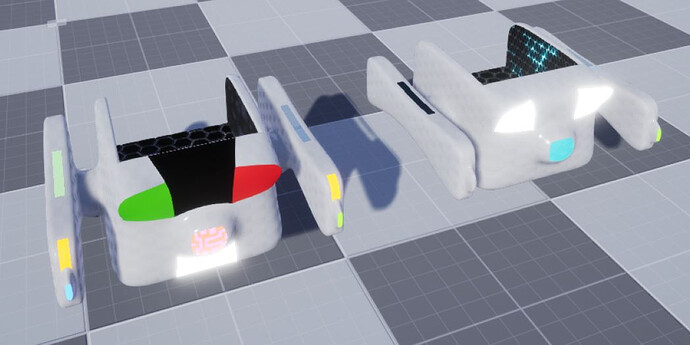 In Unreal then it gets some effects to “come alive”, e.g. engine sounds, a toggleable spotlight at the front, controlable WASD movement as well as for up- and down levitation, permanent randomised moving up and down a bit to simulate the “hovering”… 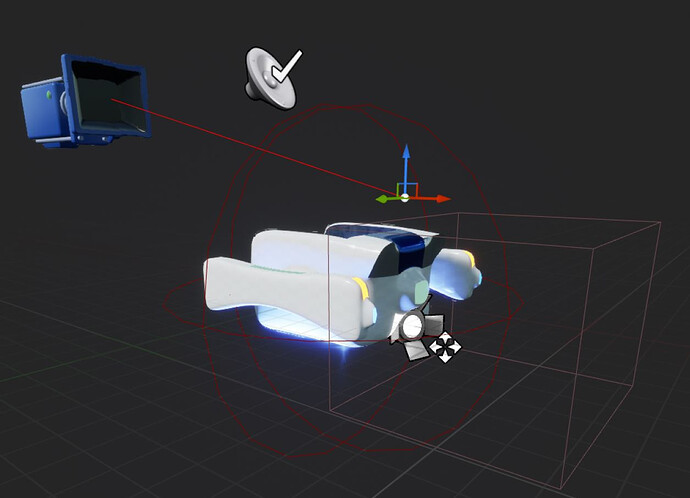 pawn-parts.JPG1256×907 77.3 KB
…and a camera with a zoomable spring arm from third-person views to a close-up first-person view: 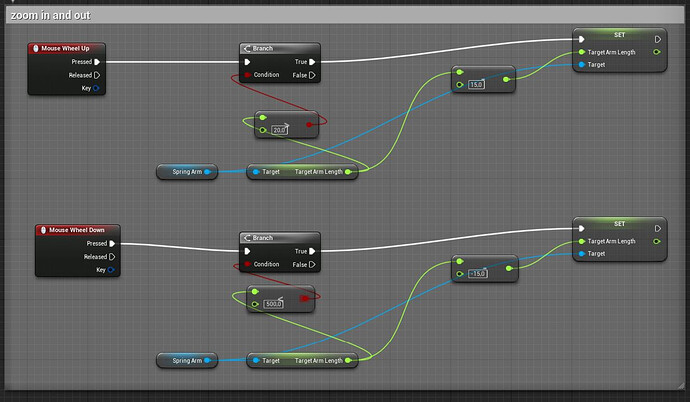 Now it got an interaction beam, some menu widgets and first actors to interact with, here a door which requires a certain (setable) key to unlock:

Now it got a inventory and first pick-up items to use or consume, so adventure-like gameplay is possible already at this stage: 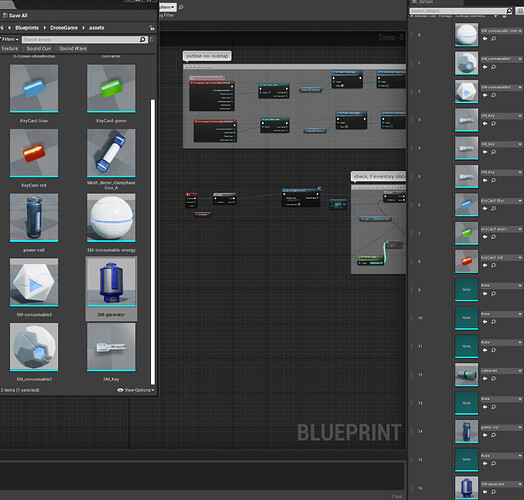 Additionally to smaller items for the inventory, the drone can pick up & carry & drop larger objects with physical simulation. 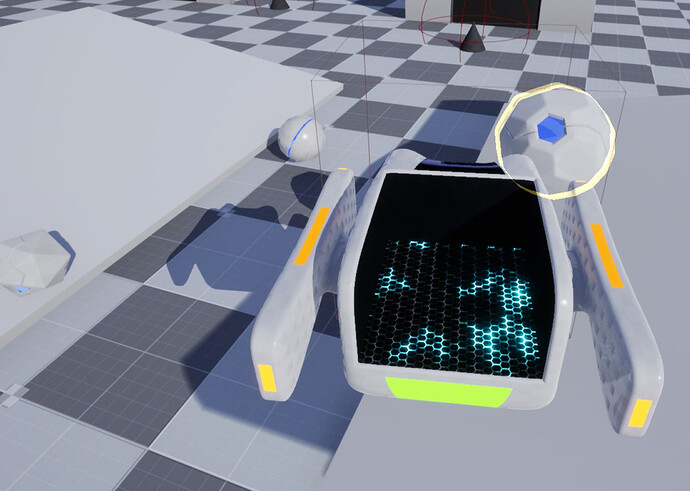 To the right: one can place a (interchangeable) mesh and define locations where the mesh may spawn randomly each round (here target-points 1 to 8). The setable rotation is inherited, so the mesh can be edited to its “natural” rotation.

To the left: sets of table and furniture combinations which are created with randomised parameters, e.g. there may be a lamp(+its light) or a sidetable spawned differently each round.

To give a more natural look, the chairs are randomly rotated each round within 20 degrees to the left and right, so they don’t look static, but rather natural left there individually.
Here the blueprint for that: 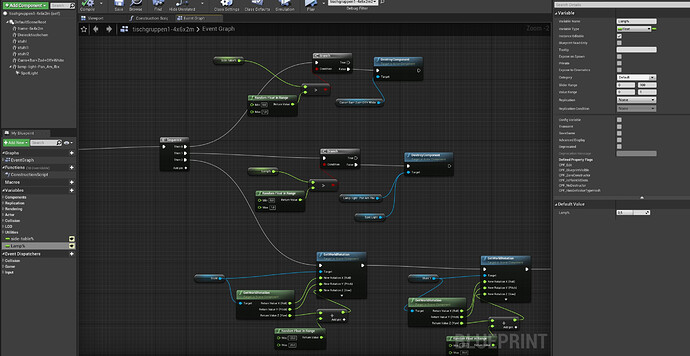 Here some damage/painzones that can have any shape and material. The damage is setable and can be applied on entering and/or while in the zone.
Each zone can be set (off, on) individually and triggered by any event like hacking a security system.
Below a example trigger in which 2 of the 3 damagezones are triggered. 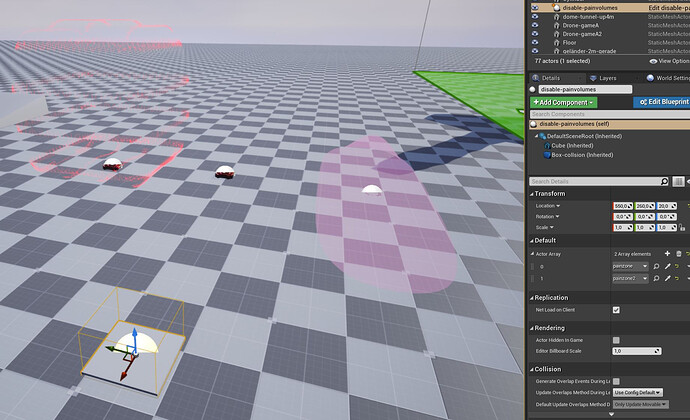 Adding enemy AI (security drone in the background) that can detect and chase player’s drone.
It hase some effects on it, and tries to follow the player until it gets to him, does some damage while scanning him, sets off an alarm if it gets close enough, and then returns to its patrol area where it moves randomly, patroling again.
The enemy AI actor has some exposed variables, so its easy to make/set different behaviour/variations out of it, and avoid predictability. E.g. patroling behaviour, chasing parameters, damage, alarm and so on.

Tests on the navmesh here look promising for both the player’s drone as well as the enemy.: 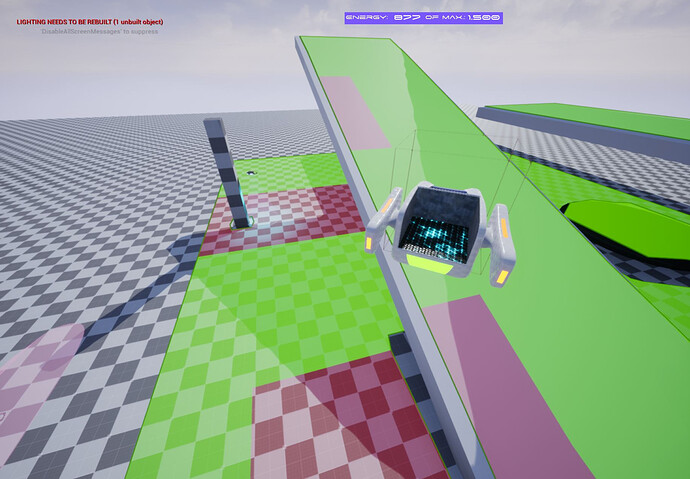 Now making some environments for the drone to explore, using volumetric fog and the new cloud system: 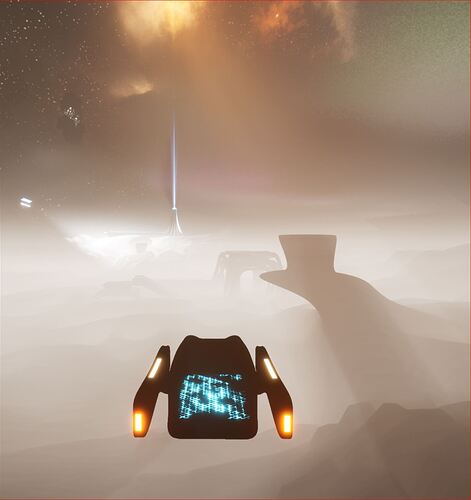 I knew going into the WIP section would haunt me. Not being able to dive in and play around with my own little drone has me itching for more.

Keep up the great work. Super impressed with all the work you’ve put in!