Motivation
I wanted to do a summer project, have loads of ideas but pretty much all of them too complicated (including this one). The desired qualities I was looking for were: something a bit different, something with personality, something that stays away from ultra violence, is designed for VR, and most of all a fun and an interesting project to work on.

Story
By current theory they are discovered in a lab, you stumble upon said lab and all sorts of commotion follows.

Topics
AI design for games - definitely kinda dumb, maybe somewhat clever, hopefully funny.
Character animation- I have kept clear from character animation thus far, this should change. Looking for ways to streamline the process for this project, inspiration by the approach from Wolfire games.
VR - give an actual reason for my Oculus DK2 order and I want to get into the VR game early on.
Going to use UE4 as it seems to be the best fit for trying this out.

Gameplay
Experimental sandbox with puzzles. Played from first person perspective with the ability to interact with the chums.

Disclaimer
I would like to think that I have some game dev experience under my belt, but in very different areas from what this project is founded on so chances are it will crash and burn and hard sooner rather than later, but I hope I will get to learn something and have fun. Also maybe someone else will get something from the process, that and the pressure generated from having made a public statement is why I posted this so early on. The only way I will be disappointed is if it just fizzles out from the get-go.

All sorts of grand and stupid promises made it is now almost time to make some boxes run around the floor, but before that I need a lab to test this in. As it has been a while since I have gotten to do art stuff and the release 4.3 of UE is just around the corner.

This is looking like a nice idea, I can’t wait to see what you come up with.

Looking for ways to streamline the process for this project, inspiration by the approach from Wolfire games.

I have been curious too to try out some of the stuff that Wolfire does, especially the two keyframe approach with easing-functions. I tried to do a simple tween between animations in Unreal, it works well. It is however not possible to overdrive the animation like Wolfire does unless there is some additive magic done. I believe Epic is using quaternions for interpolation rather than the curve values, which makes it impossible to just go past 1.0 in animation strength. (going past 1.0 in a normal blend doesn’t do anything)

What I mean with overdrive, is to exaggerate the pose strength past 1.0, to get the bouncy effect that Wolfire does to the rabbit while stopping for example.

I’d love to bounce ideas on this and see how to solve it in UE4.

I know who your lead character could be! 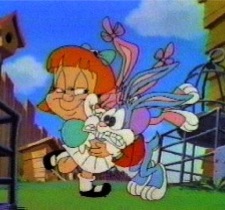