The Branch and Blade — UE5 Scene

Finally finished my first big UE5 environment! The overall concept was for a luxury bar built into a fantasy dungeon, as part of my little in-joke of a post-fantasy setting where evil wizards and forgotten gods, having failed to conquer the world with dark magic and mighty armies, simply move directly on to oligarchy for the same result. My inspirations were themed bars, commercial repurposing of historical spaces and of course Bloodborne Chalice Dungeons. 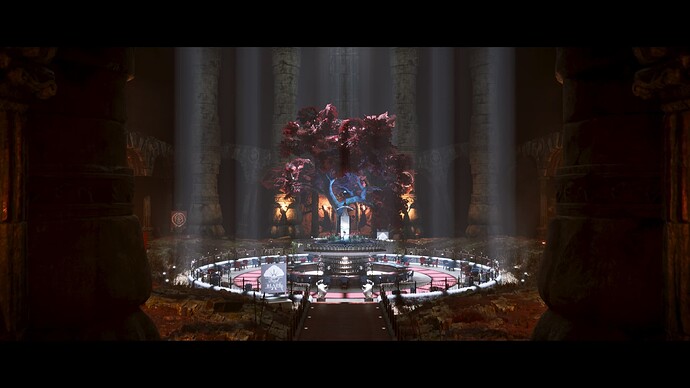 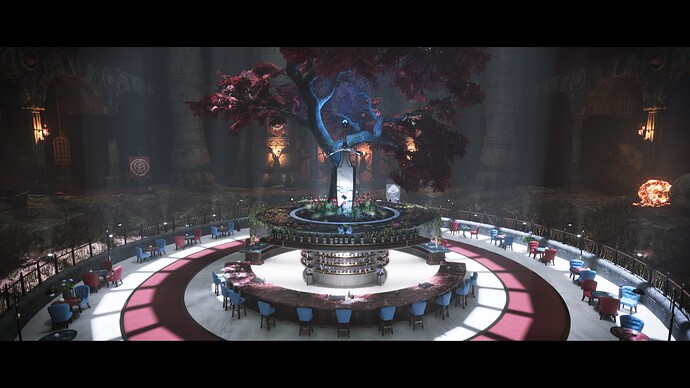 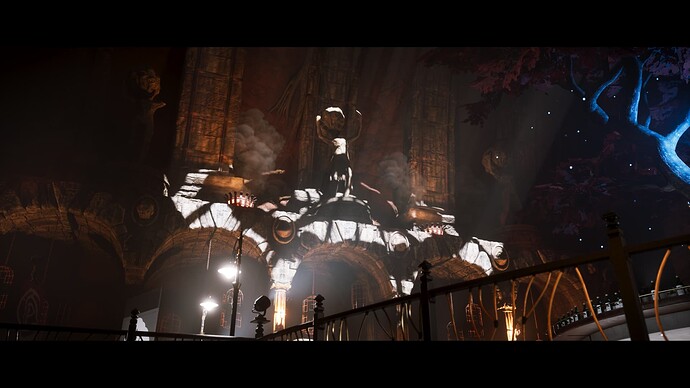 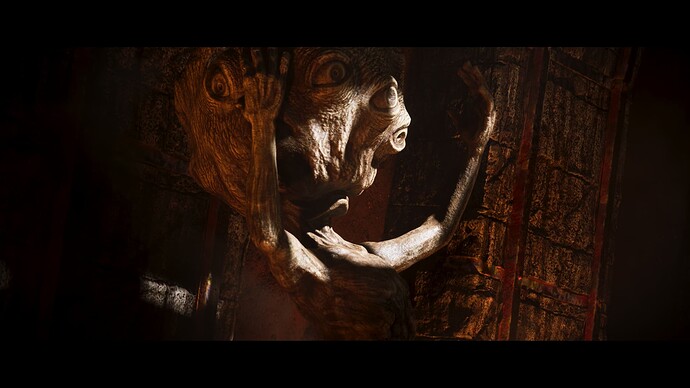 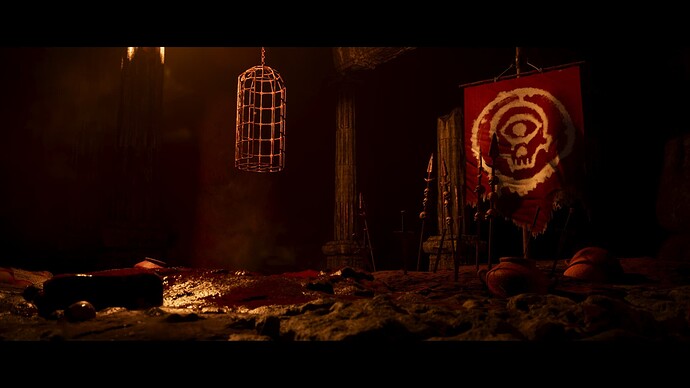 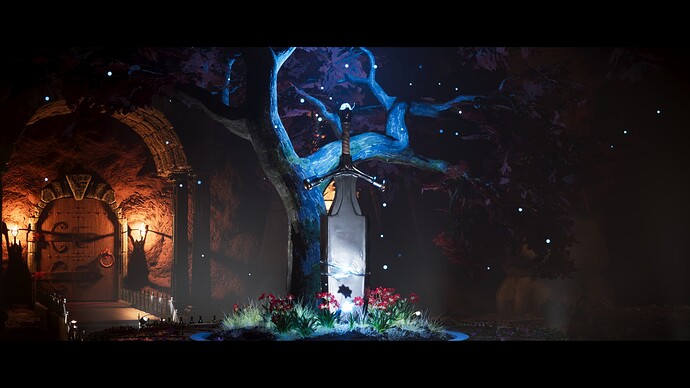 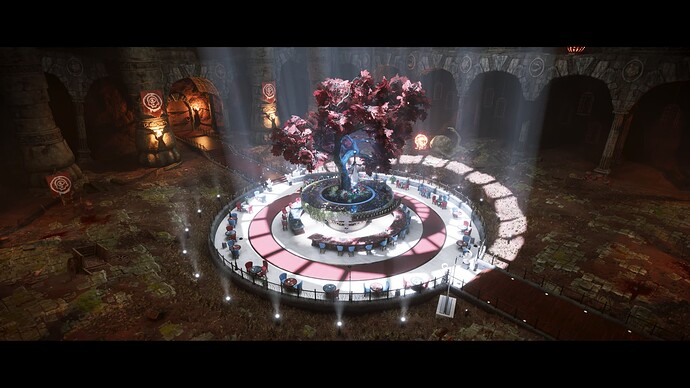 Most materials and foliage are Megascans. FX are mostly marketplace. The rest is me! Hard surface props and base meshes were modelled in Blender. ZBrush was used on almost everything for details. Marmoset Toolbag was used for painting almost every asset. UE5 modelling tools were used occasionally for final edits or applying material displacement. Graphic work like bottle labels and branding was done in Affinity Designer. The final total was 173 unique static meshes (and boy are my arms tired). Video and post were done in Davinci Resolve 18.

More info (and video!) is up on the Artstation page for the project.

There is an additional prop breakdown for the bar props on their own Artstation page showing off the modular kits I built for that part of the scene as well as small props.

Dungeon props are also broken down on yet another Artstation page so you can check that out for more exploded views of modular kits plus a lot of spooky Halloween nonsense.

Thanks so much for taking a look at it!

On Artstation you described this scene as a bar in a fantasy dungeon. All that came to mind was waltzing into a dungeon with some good friends and seeing bar-themed enemies pacing around. The ambient noise of chatting patrons lingering throughout the cave.

The entire scene is gorgeous but the tree centerpiece is breathtaking. Did you create this environment for a game or just as a standalone?

All that came to mind was waltzing into a dungeon with some good friends and seeing bar-themed enemies pacing around.

Well in Vancouver, Canada bars tend to be less of the sort where you grab a few beers with some friends and more of the sort where you spend $24 on a cocktail and everything looks very new and expensive haha. I guess I was also thinking a bit about how these places tend to displace a lot of older neighbourhood spots and sometimes cartoonishly mimic them. A lot of the reference I used for the bar pieces included furniture and lighting from bars mostly in Vancouver, New York and London—I was thinking about the kind of place you might see in a big international city.

Thanks for the kind words about the centrepiece! This is pretty much just an art scene I’m afraid—if I were to set a game in this setting I don’t think I’d have the time or budget as a solo developer to build it out to this level of detail, but I needed a full environment scene for my portfolio and it was nice to play around with some of the new workflows in UE5 and see how far the engine can be pushed in a big interior space before performance starts to suffer (the scene gets about 25-40fps depending on where you stand, although it could be brought above a consistent 30 by reducing shadow-casting lights and being a bit more rigorous about instancing non-nanite meshes).

This scene is beautifully macabre! I love the concept!

I agree with @PresumptivePanda . Your centerpiece for the bar is definitely breathtaking! I love the final moments of the video where through the bright light, the chandelier casts shadows that create a huge illuminated evil eye over the centerpiece (Illuminati, anyone?)! This is Bloodborne, Skyrim, Resident Evil, and Arthurian Legend meets Eyes Wide Shut in some dark dungeon hidden beneath a metropolis!

It’s bewildering how within this video, there are 173 unique static meshes! How long did it take you to create so many? Which mesh did you create first?

Hey, thanks so much! The first meshes were actually all the blockout meshes I imported directly from Blender using the Blender->Unreal Engine bridge, but I think the only ones that actually remained in the scene were the two comprising the central marble pillar. I didn’t use the bridge plugin for most of the final meshes since they mostly needed a lot of work in ZBrush and Toolbag, but it was very helpful for proxies.

After the blockout I actually started at the focal point (the centrepiece) and worked my way outwards. That’s pretty much how I paint so I figured it would translate pretty well. I actually have quite a few WIP shots. I should maybe put those up if people are curious? Anyway, the whole thing was about 3 months pretty much full time (I’m sort of on a sabbatical right now poking at contracting and trying to beef up my portfolio for a career move). My daily range was 0.5-6 assets, depending on scale (i.e., the large statues took about 2 days while all six bottle variants were finished in a single day). A more typical range was 2-4 assets, most days, which is a pretty good clip but really only works for things like small props and modular kit pieces, rather than hero assets.

Since I’ve had a couple people ask me about process, I published a whole ton of my WIP shots to my Artstation. If you’re curious about how the scene came together in editor this a pretty good rundown from the very early stuff to the completed video. I wish I’d got some shots of just the initial blockout but I kind of wasn’t thinking ahead at that point!

The Branch and Blade — WIPs

You’re most welcome! Yes! Thank you so much for sharing your process on ArtStation. I loved your short commentary beneath each screenshot! The drink labels are hilarious!

And the Branch and Blade has its own signature liquor!

You’ve certainly been very busy sacrificing much of your time to this project for three months. That’s what I call dedication! That’s precisely one of the key values needed in this line of work!

Stay creative, and I wish you the best of luck in your future career and artistic endeavors!