The BEST Method to See Whats in remote Inventory?

Ok, so I have trolled through the forums and tried a few things on my own and so far no luck. Now usually I will beat myself senseless trying to figure this stuff out on my own, but I am trying to avail myself of the expertise and knowledge available here, so here goes.
When you have an Item that “stores” stuff it has an attached PrimalInventoryBP component. Is there a way to trigger an event when a Player has Added or removed stuff from the item? I tried BPInventoryrefresh function, but it doesn’t appear to be doing anything when I access the Item. Should I be using the BPNotifyItemRemoved & Added Functions instead?

Along the same topic, suggestions on a Way for counting how many of a certain item are in the remote inventory?

Is there a Previous Post that goes into the Remote Inventory Systems in a bit more detail?

And… Finally, is there a way in the Dev Kit to debug and see what is happening in your BP Scripts? The Unreal Editor I use for my other projects has debugging features for checking BP’s but this seems to be disabled in ARK Editor… or am I missing something?

Cheers, and Thanks in Advance! Or in the inventory itself: 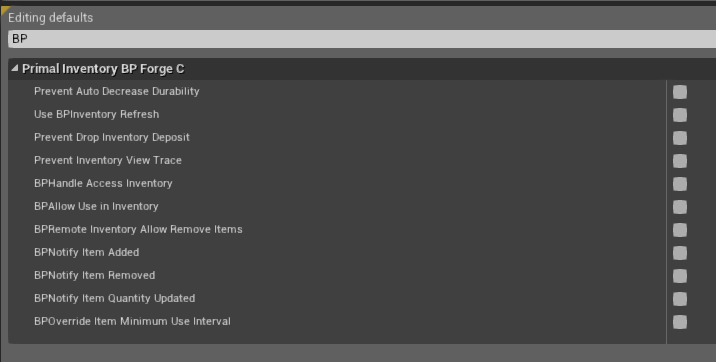 Determining how many - if any - of an item: I would highly recommend joining our Discord server for ARK Modding…

Woeful, THANK You! This is Awesome! I will give things a go today and see if I can get my concepts working. I will check out the Discord server as well.

Ok, I managed to get the event happening and it is correctly checking the number of items in the inventory. Now I want the function to Adjust the position of a secondary Static Mesh to reflect how Full/Empty the item is. The Mesh appears and goes away depending on whether there is some items or none but when it tries to Move the Mesh I just get a warning in the Log and the mesh does not move… any suggestions? Obviously I am missing something fundamental I have looked through the unreal documentations, tried checking out what nodes other than Set Relative Location I can use and I am not seeing it.
(EDIT) I Tried Using the Set Relative Transform Node instead of relative Location, It STILL Will not let me move the mesh, However I CAN Change the scale and that gives me close to the effect I was Looking for… its not exactly what I wanted. What am I missing about moving a static mesh?

Pok3r, I tried the Move Component to Node and It compiles with an Error Move Component to contains a latent call which cannot exist outside of the event graph. I “think” it would work better to be able to move the static mesh that is a part of the blueprint object, I have however come up with a fix, its not elegant but it appears to work. I spawn in a secondary blueprint object that is linked to the first and I can adjust its location freely, however I am having issues with replication and the state of the object after a server save and restart. Still very much a work in progress, but progress is being made albeit slowly. I am not sure why its unhappy moving the static mesh that is in the blueprint, perhaps it has something to do with it being in the blueprint…? Thank you for the suggestion and if you have any others I would love to hear them… as sometimes the answer is staring you in the face and you just cant see it…

Sounds like you are trying to add it to the wrong BP. It needs to be used on the event graph of the structure BP. IE the “Wall_Metal” BP, NOT “PrimalItemStructure_MetalWall”

Yes, that is where I tried the move component node. Everything is in the Structure Blueprint. I have found a slightly better work around, I can Adjust the transform Scale of the secondary mesh, it just wont move. I can live with that but when the server restarts its no longer visible, it reverts back to the initial state of the Object. Not sure how to tell if its a save issue or a replication issue.