The Art of Packaging Shipping Builds in Unreal Engine 4

I want to create an overview/tutorial here where people can find it about the different ways of shipping a game in UE4 to save people the struggles that we went through. It is just no fun at all to figure it all out by yourself using scattered documentation, the one-liners on the UE4 answer hub that assume you already know half of the story and Google.

From what we figured out, there are 3 different ways of packaging:

***Only the AutomationTool.exe with options via command line is useful for creating the final game for Steam upload or other distributions. See below why. ***

Project Launcher in the Window Panel

AutomationTool.exe with options via command line

For the final shipping built, you will want to create Patches and DLC to not have the players download the full file size everytime you update, but only the things you updated in your project. Therefore File Panel -> Package Project is out.
You also want to create a 32bit shipping built, because this one will run on 64bit systems as well, while 64bit builds will not run on 32bit systems, as with most other software. Best case is that you create both 32bit and 64bit. Therefore using the Project Launcher in the Window Panel is out.
This leaves you with the AutomationTool.exe with options via command line. It basically is a separate piece software that grabs all your project files and wraps them up to the shipping built. It does it separately from the UE4 Editor, which is why you can still play around in the Editor while packaging. The AutomationTool is hard to use directly and the Tutorial will focus on this. The other two ways of packaging have documentation which works and enable packaging with some playing around and trying, so I will skip extensive tutorials.

Please note that the final shipping built, the actual game that you and your customers will play, will not differ from one option to the other. So that’s good news. They are basically just three ways of achieving the same thing, with the first two ways being useless if it comes the final build that you want to put into your customer’s hands.

0. Preparation: Just create a new project from the launcher without starter content, then add a sphere in order to create a map and save all.

1. Off we go: Start the Project Launcher within the Editor, follow Epics Tutorial and create one successful project launcher build. Do not give up, it actually works! This done, go on and save the log file. The only purpose of this step is to get a saved log file. After this is done, you can delete this project folder and continue working on a copy of your project folder that has not seen any packaging. 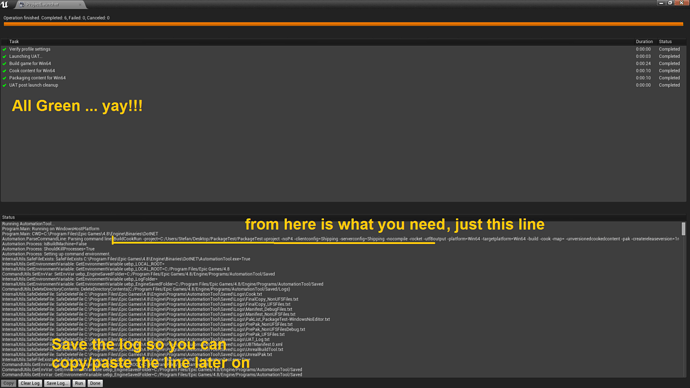 2. Now back to Windows: Open the command line window by typing cmd in your Windows Search field or the Windows Execute and hit enter. (both can be found using the Start Button)
Now you have entered the long forgetten realm of ancient DOS. Here you will execute the AutomationTool with options. It could also be done in a normal modern shortcut that you create from your .exe, but for a full build the options line is too long for that. Now some Old School! Work your way into the AutomationTool Folder using the old school commands in the screenshot. 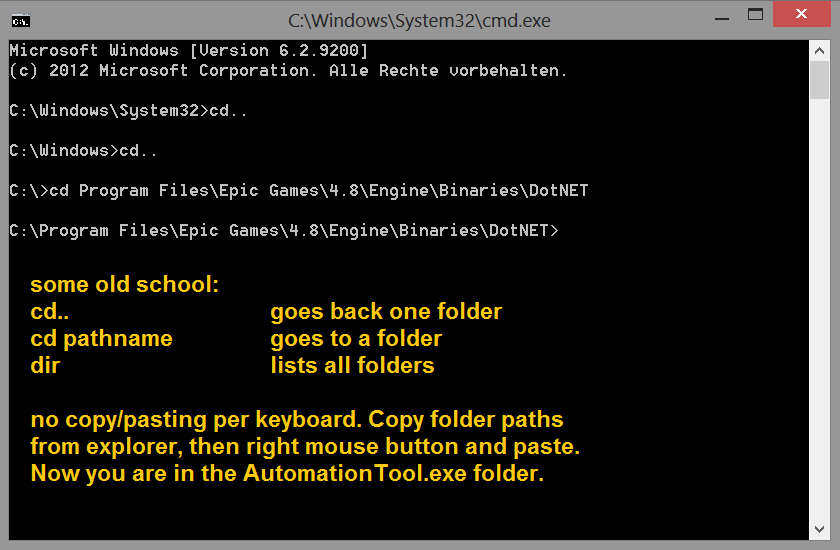 4. Ready to Package: Start the AutomationTool.exe as shown in the sreenshot with the (extremely long) options line pasted from your saved log file.The actual UE4 Project File does not have to be open for Packaging. Monitor the Automation tool to make sure everything is fine using the task manager for example. The cmd will close once everything is done. 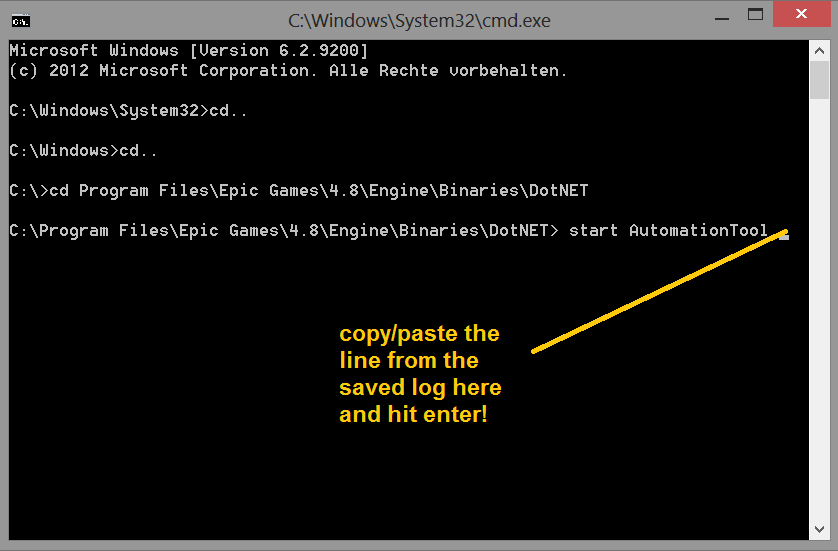 The steps are essentially the same as for releasing, but this time you set up the project launcher for patching and extract the new command line from the saved log.

In testing, for an empty scene with just a sphere the .pak was released ~30MB. Then we changed the color of the sphere from white to blue to be used for a patch, and the patch file was only ~100kb. So that’s really useful for dlc and patching.

updated with patching and AutomationTool, which we tried last weekend

Thanks alot for the tutorial. Is it true that the main difference between the launcher version and the command line tool is the lack of 32 bit support? If so I will go with the launcher tool since I only target windows clients and maybe in the future Linux or perhaps Mac, but for now only Windows

Thank you, for making this tutorial, very usefull, and easy to understand. Windows-32bit compiling + some free RAM(editor is not running) is always nice. :3
But there is “Fatal Error” with no message, when trying to start 32-bit exe of packaged build. >_>

So you seriously can’t provide patches with the editor packaging?

What changes would i need to have it work with a custom modified engine instead of the official released engine binaries ?

When i try to run the process, i get errors about files being in use and nothing gets compiled or packaged.

What changes would i need to have it work with a custom modified engine instead of the official released engine binaries ?

When i try to run the process, i get errors about files being in use and nothing gets compiled or packaged.

I think that has nothing to do with custom engine version because I’m getting the exact same errors with the 4.15 launcher version… so can’t compile using this method

When I am trying create DLC for android, then I get an error, when starting “UAT post launch cleanup”. Error message is: “Index was out of range. Must be non-negative and less than the size of the collection.”
I am trying it on new empty project “Third person character” and it fails everytime.
Can someone help?

2 years later and you still can’t create a 32bit version with the Project Launcher, Why you do this Epic?

Is this post official or something?
I say this because… I keep sending this link to a LOT of new unreal users that don’t have a clue to how properly package their games BEFORE they can sell it…

What I mean is, I hope this thread stay here for a long time because it’s really useful and if people start to share their packaged games only within the editor it could look bad for the engine (which is an awesome software!)

When I am trying create DLC for android, then I get an error, when starting “UAT post launch cleanup”. Error message is: “Index was out of range. Must be non-negative and less than the size of the collection.”
I am trying it on new empty project “Third person character” and it fails everytime.
Can someone help?

Did you ever fix this? I’ve been trying to package my DLC for three weeks and not even Epic know what’s going on.

Read half of this tutorial, and thank the author. Since Epic always lack of some clear documents, we need such a kind of material.