Hey there. Just wanted to share with you my latest work - new psychological thriller game The Apartment that just hit Greenlight.
The Apartment is quite unique mix of genres, bizarre combination of detective action adventure game and psychological horror with some interesting puzzles, all cleverly tied together with dark and heavy story. This game is titled as psychological thriller. Weird genre for a game, right? I know, but it has its purpose. It is not a pure horror and it’s not just a story adventure either.

The Investigation
As detective James Sachs, you lead the investigation of several murders in your area. Young girls were found dead, arranged and with strange injuries that don’t make any sense. It’s up to you to find out who these girls were. Why were they killed. And find the murderer before he strikes again and solve the case. Case that might prove to be more difficult and challenging than you ever imagined.

The Nightmare
You went to sleep in your apartment. In your own bed. But you woke up is a strange room that is not your own. All doors are locked. There is no way out. How did you get here? It doesn’t matter. What are you doing here? What is your goal? Survive? Win? Escape? No matter what is happening, you can only be certain of one thing now - nothing makes sense anymore. Main gameplay of the action-adventure part focuses on detective work - exploring crime scenes, finding evidence, connecting clues, questioning witnesses, completing simple word puzzles or physics puzzles and more.
There are several crime scenes, each one a little bit different. Some are focused more on finding evidence, other on creating timeline for the crime. There is also a lot of other smaller scenes with its own clues and objectives that reveal more about the investigation and push forward the main storyline.

Horror part of The Apartment is focused more on psychological horror. There is no monster hunting you down. There are no jumpscares waiting around the corner (well there are, but there is only few of them) Instead, the main purpose is to create unsettling and eerie atmosphere and make the player as uncomfortable and creeped out as possible. Why? There is a reason for everything…
Path forward is often blocked with simple, yet interesting puzzles. Word puzzles, number puzzles, simple physics stuff, but also some play with light and shadows.
Even this part of the game still follows the main character - Detective James Sachs, but from very different perspective and it is still tied to the main story of this game.

There is no clear line between “investigation” and “horror” parts. You can never tell what is waiting around the next corner. Both worlds of reality and nightmare are slowly fusing together. But is there even such a thing as reality anymore?

The Apartment is on Greenlight right now. If you are interested, feel free to check it out. Any help is deeply appreciated. Steam Greenlight::The Apartment
You can also find little bit more info over here: The ApartmentGame Windows - Indie DB 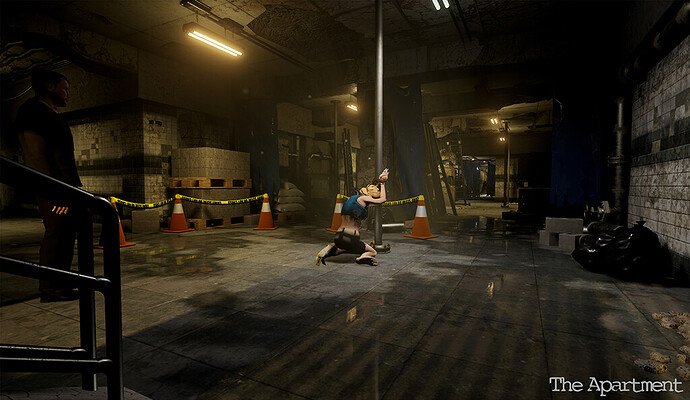