Terrible job on the new forum

There’s too much padding and wasted space. Just look at the giant gap under everyones post. Maybe okay for mobile, but please optimize for desktop usage.

The old forum was not “thriving”. Most of the community already migrated to things like discord and traditional style forums are becoming old fashioned. Epic obviously felt that the old forums was obsolete and needed a facelift. The new software achieves this.

Replies that come immediately after the post have the reply indicator suppressed, since it’s the next one in the sequence. Once more folks reply, it’ll show up:

Please let me know if you still see any strange behavior on the above fixes, and we’ll circle back on the design items soon.

EDIT: Apparently I got excited and jumped ahead a little. The script is still running, so everything may not be at 100% just yet

Maybe to you, but not everyone needs to have an immediate active discussion that would benefit from a chat client like Discord. “Old fashioned” technical forums are drastically preferred for things like finding other people who had the same/similar problem as you might be experiencing and seeing what their solution was. The old forum might not have had the “engagement” level that want to see, but the true engagement level also includes the number of developers who don’t need to make a new post, because they solved their problem through existing information. You can’t do that in Discord and it’s harder to do that with Discourse.

I mostly lurk or post in non-public subforums here. Most of the time, I can find info that I need without needing to make a new post and waiting to see if someone who happens to have the same problem can comment. I have enough other things going on that I can’t just sit in a Discord server and try to have an active conversation with the same goal. Does that help some people? Absolutely, but it is a completely different style of interaction than is expected from a forum.

EDIT: Apparently I got excited and jumped ahead a little. The script is still running, so everything may not be at 100% just yet

Not quite there Amanda

My forum thread is still missing posts and pages that I link to directly from the marketplace [Questions] section for support-answers. Visitors are now greeted with:

Nonetheless, I emailed marketplace support today and they are aware of all the ongoing issues.

Oh, I have noticed right now that there are replies to a certain user post, and replies for the thread, in general. PLEASE, NO!

And what happened with signatures?

I hear what you’re saying about having an “archive” of information of sorts, but at the same time this industry moves quickly and threads from 5 years ago for example will be answering questions based on old versions of unreal engine which will most likely be out of date to current versions.

However the simple solution is to use the “search” function. Both the new forum and discord has this feature.

Is there at least an option to limit responses per page? Pages helped me to focus my thought process, this new style is just shoveling stuff into my brain indefinitely.

Is there at least an option to limit responses per page? Pages helped me to focus my thought process, this new style is just shoveling stuff into my brain indefinitely.

Suggestion: Turn JavaScript OFF, and it’ll default back to Page View. However, since that also breaks most functionality, its not a great solution. Maybe there’s a way to modify browser user-agent or something related, that forces ‘page view’ on? IDK, and sadly there’s no one around from Epic to answer.

In any event, it’d be better if the forums offered a page view / scroll toggle preference / setting. Not sure we can expect that tho, as Epic didn’t even listen to feedback the last time the forums got a facelift in 2017.

There seems to be an invisible hand guiding decisions on here. But that person never posts. Not even Sweeney posts on here anymore. So its better to just have low expectations and accept the forums for what they are, a last resort for those who’ve tried all other channels or options elsewhere.

One thing that would be helpful: When browsing a category in the forum, it currently shows us the title of the thread and the date/time of the latest activity; it would also be helpful to know when the topic was created (i.e., the date of the first post in the thread). For example, if a thread is called “Latest Engine Version Has Problems With Widgets Disappearing,” and the most recent activity is today, I might think that the thread is about v 4.26, which is relevant to me because that’s the version I’m working in. But if the thread started three years ago, I know that it’s not about 4.26 and I can ignore it.

That’s an extreme example, but I have had plenty of situations in which I clicked on a thread thinking it was relevant and then realized it was an old topic that people who aren’t me still want to discuss.

Another suggestion: Only a few categories are relevant to me. However, with the new format, there is no way for me to see whether there are new topics in a given category without clicking on that category. Instead, the “Latest” shows new posts on all categories. I would prefer to be able to see the latest post in each category. I think the old format allowed this, and it was nice.

ugly UI for the new forum!

I think the new design from when you’re inside a thread looks dope as ■■■■, but I think the main page view is a bit confusing and could still use some work!

The dark color scheme is very hard on the eyes. Maybe great for young people, but not older ones. I have to stop using the forum.

I have to stop using the forum.

Oh, no! But seriously… have you considered setting it to Light colour scheme? 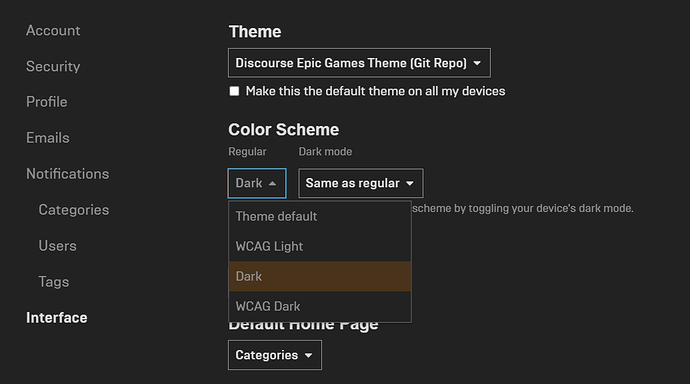 I for one hate this forum now - and have long ago stopped using it. Posting a question is now painful. I used to be able to do it quickly and intuitively, now I have it’s like trying to solve a puzzle looking through a mirror - while concussed. I can’t believe that so many smart people think this is a great design, and I can only think they’ve intentionally made this impossible to effectively use to drive people into the paid UDN.

Don’t believe the hype. Some like it some don’t.

For starters, its impossible to find anything anymore on here. Try searching long threads with 100’s of posts for nuggets (you have to turn-off javascript and manually search in legacy ‘page-view’ to really find anything). Same goes for strict-filtering of posts by ‘title’. Also threads keep getting bumped to the top just because users delete posts.

There’s also the problem that UDK devs can’t post anymore in the UDK legacy section and yet UE5 Devs can post there and still tag topics as 5.0, hello?

But hey Epic are happy with the shiny upgrade because they’re happy to deceive themselves. They don’t care, as long as it looks like the forums are active. Even if most posts now are of low value or quality and experienced devs no longer post on here anymore.

How can you tell??? Most new threads are from posters with < 10 posts trying to solve their own specific problem without contributing anything more. Epic still bank that as a win, and include Unreal-Challenge submissions as a way to sell the illusion that the forums are active / vibrant.

Basically Epic execs are more concerned with perception versus reality (abusing metrics to tell you what you want to hear). Its been like this for a while. But the actual reality is captured in this post here in Hourences survey thread, all the way back to this classic feedback thread from 2017. So you can tell skilled devs who know anything left long ago. But hey as long as you’re printing money like a central bank from your flaghip product, you don’t really care about any of that.

All that’s left is a choice to be made. Either abandon the forums like so many others have done in the last 5 years in silence (or silent failure) and say nothing and let things continue as they are. Or say something and try and push for change or a nod back to when the forums were a lot better.

I like it, Nvidia’s developer forum is also like that, but I would add a big nuance: as much, good difference between the visitor and the regular user, that’s ok, but level 2 and 3 users? why this difference, I have a little past the age of squatting the forums also to raise my level. That was my only reservation