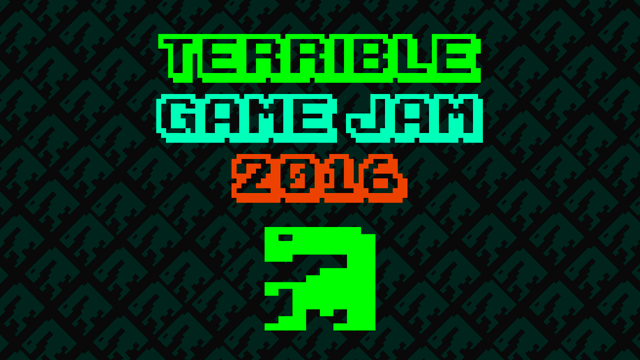 Think on a bad game. Making a game much worse. Then try to make it terrible.

To participate send the link of your game until February 1, 2016.

Rules
The rules is just the game be bad and accessible.
Otherwise, nobody will neither play.
So for your game to capture votes make it accessible.

Although, if that is what you are going for, congratulations! That’s a terrible game!

And some terribly loud and annoying sound to complement it. I had my speakers turned on full blast at work and it shook the entire office! =P

Man that game is terrible!

Although, if that is what you are going for, congratulations! That’s a terrible game!

I did in 10 minutes to encourage staff.

And some terribly loud and annoying sound to complement it. I had my speakers turned on full blast at work and it shook the entire office! =P

It was taller in the original. I had to reduce the amplification. Because it was overdone annoying.

Man that game is terrible!

I don’t understand what the point of this is

I don’t understand what the point of this is

If you say so

I’m a big fan of your graphics, just breathtaking:)

If you say so

Someone needs to tell this. ^ ^
Anyway, that’s how the guys begins.

I’m a big fan of your graphics, just breathtaking

Thanks Zeeker. : )
I was inspired by these tutorials: http://sixinside.com/tutorials/#all :o

As such it can enter its own competition, and because its quite pointless, from lack of real competitors this game right here should win its own prize.

I am wondering if this is troll bait or not, and trolling is again form of a game. But it is strange game where when you start playing it you lose by definition.

As I writing in TIGForum:

in this Jam If you get in last place can still be happy with the result. haha

In other words: have no “terrible features” in your game is what will make your game better.

I also do not know where this is going. It all depends of time and participation.

It is possible, for example, create a framework with the characteristics that your game should not have.

And the differential this is that, out of this competition, few will want to be part of that group - if this information is more widespread.

The question is that Terrible Games exist for lack of information, feedback and experience.

For example: only with two simple tips who I provide to author of Lotus Jump, he can increase dramatically your results if reflect more on this. So imagine with more time, and more participation, and case studies.

The point is that, add features and design of good games in your game does not settle the issue. As contaminated water does not improve with sugar, perfume or coloring. It is necessary removing what does not work before adding. And unlearn before learn.

And all of this is joke and fun. Or a gamification experience. Or dilly dallying.

Everyone sees what can.

ET was not that bad of a game… It had heart, adventure and some of the best graphics for its day… <grins>

ET was not that bad of a game… It had heart, adventure and some of the best graphics for its day…

What I think about ET write here:

E.T. The Extraterrestrial wasn’t a terrible game - it was actually ahead of its time. It was just rushed to the point of failure. This article may be of some interest to you. http://www.neocomputer.org/projects/et/ It’s possible to make some quick fixes to the game code that solve many problems people have with it, and make it shine as it was intended.

The arguments of guys are good. But I think they not are convincing nor for developers.

Advanced to time is like saying that your customers are wrong or are stupid. And try to convince with logical arguments them they need it, even if your emotions and needs tell you otherwise.

I believe that still today It is too advanced for me. Because I do not understand what is the moral of the game:

It is so advanced that even today we do not need this. When I was a kid, so …

Anyway, which will be the target audience of this game? Extraterrestrials?

I do not see fun. Only “taskfication”. So I think that this is one of the terrible games what they should pay for the users to play. hehe

ET failed in part because of the macro climate. There were more games and consoles on the market then their were people willing to buy them. Into this market Atari produced more copies then there were Atari consoles in existence. In hindsight the collapse was pretty obvious. But bubbles are emotional phenomenons that often get missed by the key participants.

Product and Market are two sides of the same coin. One does not exist without the other.

Without the market a product is just an object. As a stone - what including is most helpful to the landfill that ET cartridges

A product that does not solve problems or meet people’s needs, always will be a bad product.

Say that the market that is bad and the product is good, it is just fantasy. Because this product always will be bad in this context.

It’s exactly the context, epoch, fashion and trends that determine what is good or bad.

There is no product bad or good by itself.

A Ferrari is only better than spoiled food because you do not go hungry.

So ET would be a good game if it had been possible released it before the PONG. Because PONG it’s more fun.

I think what is this that you meant by other words: ET could have been a good game. But it has never been, nor ever will be.

And if (Atari produced more copies then there were Atari consoles in existence){
Then set bad to maximum level. haha
}

Loading has my vote!
Very artistic, but steep learning curve and easy controls.
Froggame not tested.
Hitler is not cool, that’s the reason you can not win with him.

Hitler show for user to Press Space, but to play have to press Enter. Well thought! kkk

Terrible games have music that does not suit the game. I think that no there bad music. There is music that combines or not. A lot of noise, sometimes, can be better than music.

To choose, the music can be converted in scenes, memories and emotions or mental states what you want to the game. As joy, happiness and enchantment. Example:

The Asian music are very good. They are very good at expressing emotions in art. Perhaps due to culture.
So, to make a terrible game, never use asian music.

The game only requires:

All this to test an unknown game?

This technique of move away is well advanced. This game is so good that people do not even test. 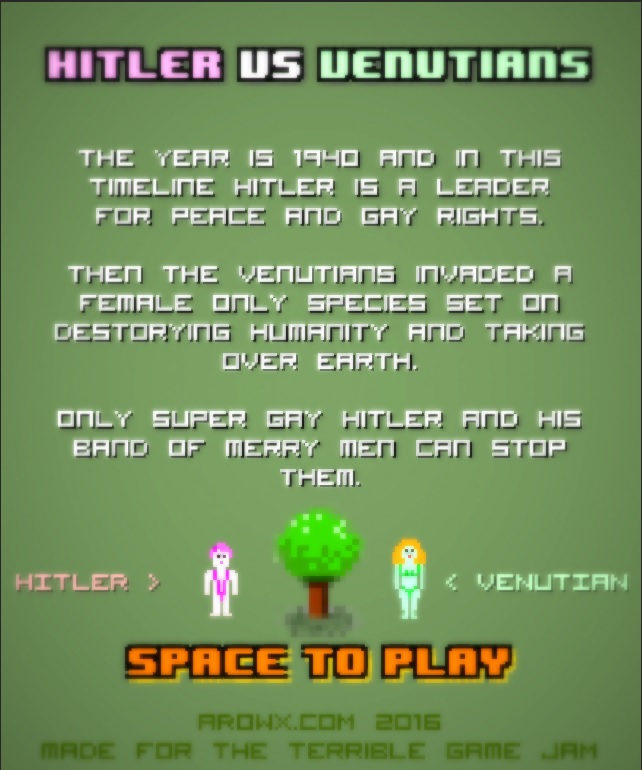 Terrible games have story and characters that people do not identify themselves.

4- No surprise and originality

The more repetitive most terrible. There will be less curiosity, and less time people will endure play.

Terrible games have objectives that people have no interest in resolving.

The player has no chance of winning in a terrible game. In positive psychology, a flow state, also known colloquially as being in the zone, is the mental state in which a person performing some activity is fully immersed in a feeling of energized focus, full involvement, and enjoyment in the process of the activity. In essence, flow is characterized by the complete absorption in what one does, and a resulting transformation in one's sense of time. Named by the psychologist Mihály Csíkszentmihályi in 1975, the concept has been widely referred to flow ...

Still this is a trend:

This game show for user to Press Space, but to play have to press Enter.

We do not know how to move the troops. There is only one camera to watch the game play alone.

The game’s biggest challenge is lerning how to play.