Hi,
I need to model terrain using DEM. I googled for the best way but there are several options and some of these are also outdated. Anyone know what is the best way to obtain this goal? Is there a fast way?

I did this a while back:

Some amazing stuff can be done (not my stuff):

The key for me was learning to use L3DT:

The Standard Edition is free.

PM me for more info on this process.

Hey is this still the best way to import DEM into UE4?

Just as a FYI, and yes it depends on what software you have access to, what resolution you need, hassles galore, you name it, but what I"ve seen so far and I need this kind of data too, is that while free, l3dt is ‘ok’ but the images I’ve seen done with it don’t compare favorably, to world machine.

I think ? you can ‘tile’ with free l3dt, its just the resolution and other restrictions that may not appeal to some. I looked again at comparison page and saw nothing about tiling restriction on free version . The way l3dt does it to me seemed to be a bit of a mess, maybe just because it was an island, not sure, but I think you’d have FAR better result with world machine. If you don’t need tiling , you can therefore use the free version or if you can afford professional version all the better. I know other apps exist, but none that I know of support tiling ( think world composition if that is something you might ever need ).

I’ve used blender before for this which works but may not give accurate enough results. Take real world data from opentopography, or even here:

SRTM Tile Grabber , ( which isn’t great for getting exact areas, but simple to get at, no fuss but harder to pinpoint your area.) , create a plane, subdivide 300 or so times, DISplace modifier, load your texture ( png whatever), adjust to your liking, then the hard part comes but once you get hang of it, its not bad ( no tiling support, short of SLICING image in gimp/PhotoShop or such , haven’t done it!) : 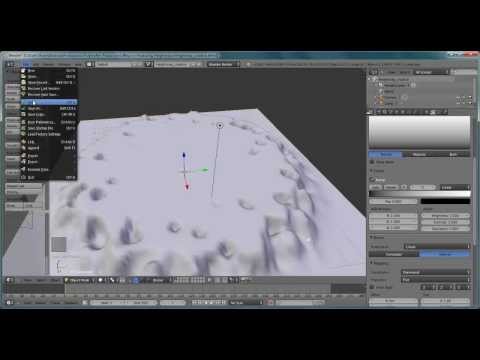 Thats how you go about it in blender, and I offered that not sure what you were capable of using financially, etc.

One last thing, the url noted here showing world machine and the island realworld data, is 90meters, which isn’t good for terrain walking, you really should get something smaller like 10 or 30 which is imagery’ closer’ to the ground so it gets a better snap of the geography.

Hope that helps , in addition to what has come before this.

Hi, I just finished tiling with l3dt. Exported an 8x2 tile map in R16 just fine. I am using the pro 90 day trial version so I’ll check if that still works in free standard, however, l3dt standard edition has better outputs resolution than WM. WM free is max 512, l3dt is 2049.

DId tiling hold in free version ?

That would be awesome.

Ya true L3DT is nice in that free does offer much higher res;)

I’d use l3dt myself, but my main terrain is 5101 sq, and free can’t go that high, tho I could use lower res for main terrains ,no ideal but doable , haven’t though a lot about tiling etal as I’m still deep in terrain creation.

i don’t know if i’m at right topic
my question is .dem file, .dfg (which i made in some other softwares like EDEM, ansys, MSC) can be import to unreal?
sorry i’m newbie, hope get any info about it.

EDEM & ANSYS look like Mechanical Engineering programs All the apps we were writing about are Civil Engineering. In CE, DEM stands for Digital Elevation Model. Uses to make heightmaps in UE4.

You are probably looking in the wrong topic.

EDEM & ANSYS look like Mechanical Engineering programs All the apps we were writing about are Civil Engineering. In CE, DEM stands for Digital Elevation Model. Uses to make heightmaps in UE4.

You are probably looking in the wrong topic.

in those program can calculate physics, weight vehicles, the force, etc, make the soil layers (very small particles), interactive between soil/mug/(material) with human/car…
so if it’s not in Content Creation,where should i find it? i’ve go around the forum and see no topic about it…
thanks so far.