I’m trying to create a Tarray our of UPaperSpriteComponent components. but when i create a blueprint, the component detail panel is blank, am i doing something wrong ?

I was able to reproduce the blank details panel and have entered a bug report (UE-28067) for investigation. For your issue of having an array of components, the best solution would be to declare each component individually as well as have the array available. After the CreateDefaultSubobject line for each component, you can then add the newly created component to the array:

oh that works perfectly thank you! Hate to ask , but is it possible to create a 2D Tarray or are they 1D only?

You could have a TArray of TArrays, however creating a single two dimensional TArray is more complicated and generally avoided.

ok np, thanks for your time!

I’m having a related issue where when using a TArray of components, even with a UPROPERTY and EditAnywhere, I can’t modify the components while the game is running. I also can’t find UE-28067 in the tracker when searching. What happened to this ticket?

Yea, i’m referring to changing values in the details panel. Here’s screenshots to show what I mean: 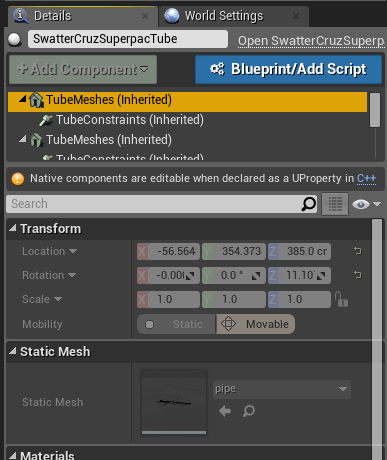 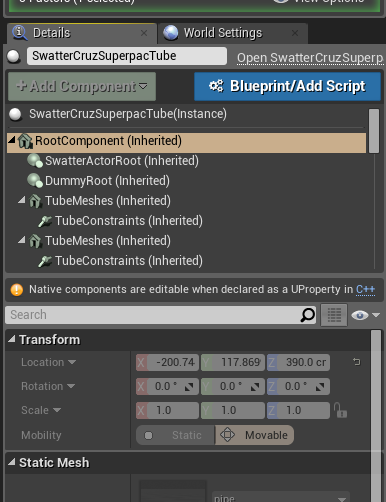 So, even though it’s set as EditAnywhere, I can’t change anything in the details panel. Even the RootComponent, which is the first element in the TubeMeshes array, isn’t editable.

Yea that solution does work, but I’m adding in components dynamically so I can’t create them separately anyway. I was just wondering about the status of the ticket. It’s not something important, but just an annoyance and something that can make work a little harder sometimes.