Yes I am a beginner

I want to learn how to make games for mobile devices and Unreal Engine seems so much more interesting than Unity - so I figured I would start by looking at the Blueprint template of the Tappy Chicken.

I have clicked around in the Blueprint of the Tappy Chicken and still cant seem to figure out how to edit the distance between the spawning obstacles (pipes). 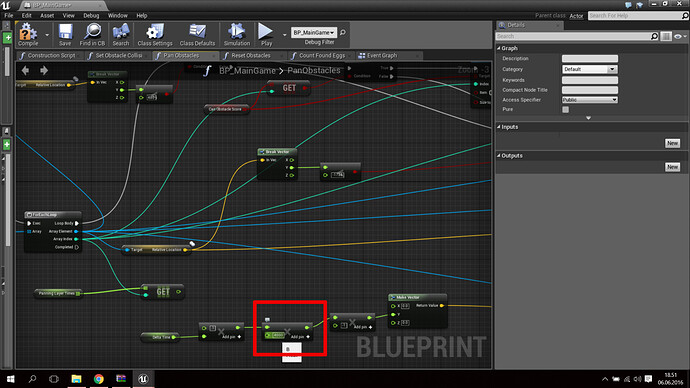 Anyone with a hint?

i don’t have Tappy Chicken right but i just like to give you an advice , Tappy Chicken is not the easy sample in the UE4 its very hard as its complete game , so don’t give yourself a hard time to learn from Tappy Chicken , its been a year and i 'm learning UE4 and right now i can make my own game but still i can’t understand all the blueprint in Tappy Chicken

IMO instead of using distance to use to spawn you should use time. If something spawn every 5 secs while going at the same speed the distance would always be the same. Plus you can adjust the distance by time to spawn. I would use a set timer by function that spawns object and make it loop.

Edit: Just realize you were asking on how Tappy Chicken did it. Oops.