Proud to announce that TankYou! has just been published on steam greenlight today, just a couple hours ago!

http://s32.postimg.org/sv1jbypbp/image1x_small720.jpg
check out the game’s trailer on steam for some crazy gameplay](http://steamcommunity.com/sharedfiles/filedetails/?id=685073685)

Alright! Feels good to have gotten the obvious part off my chest, for start

I tend to get caught up in excitement very easily, so I’m sorry if this is not going to look like a professional topic!

Before I go on mumbling I have to say first that the game has been thought out as a spiritual successor to an old NES classic which I loved to play with my friends a lot, back in the day. That game is called Battle City.

Now, there are a LOT of “Battle City” type games out there: clones, 3d remakes, 2d remakes, you name them. But what TankYou! aims to deliver is not a copy of the original.
Furthermore, it’s only connection to the original game would actually only be the fact that there’s tanks in the game.

What I want TankYou! to achieve is the fun factor that the original game has so magnificently brought to the table at that time. But also have it make use all the proper tools and mechanics that a 2016 game would!
A lot of effort has been poured into really raising the bar and making a fully destructible arena possible while keeping the fun higher than the fps count. It hit me hard, but having everything destructible is hard to control and keep as a fun experience! And I’m not even going to get into the fps counts!(which are good!)
Gameplay sessions are supposed to be short, intense, fun and it’s definitely the game to encourage playing with friends around.

TankYou! is a twin-stick arena shooter with the lovely twist that the original NES game has brought at that time - world destruction, accompanied by your friends to make for some fun and intense game sessions.
The game will feature up to 4 player couch-coop support but also fill out the rest with AI controlled tanks if you just so happen to not have friends lying around your house.
There’s going to be multiple maps spanned throughout diverse environments accompanied by unique bosses when playing Arcade sessions.
Game modes include: Arcade, Deathmatch, KingOfTheHill, Gold Digger, Last Man Standing and Capture the Flag. ALL game modes support up to 4 players coop and Arcade will even feature more, if we count AI tanks!

Next to the above features stands a very flexible power-up system for everyone to abuse. It goes like this: everything falls from the sky via air mail - including you and your foes. Just like you can see in the above gif.
More than that, all these powerups that fall from the sky, can be combined with each other, stacked and augmented if you happen to pick up the same one, over and over again.
Gameplay-wise players will never be stressed about getting killed or losing. The learning curve is very light and even if you can’t master advanced techniques, you can still win and have fun. After all, you get this awesome respawn sequence to make up for any miserable death:

Other things to mention are that the game is created entirely with UE4 blueprints and that the release date is already planned for the end of summer 2016.
So if you are on the lookout of a casual, twin-stick shooter to rock the couch with your friends(… or alone

) OR you just like to support a friendly indie, then head out to the game’s steam greenlight page here and cast your vote, it means a lot to me! But please feel free to ask anything right here as well, I will gladly get back to you as soon as I get the chance.

Thank you for having the patience to read through and I leave you with a little in-game screenshot collage:

Looks very good, man, ill give you my vote.

Thank you for your support! I’m very glad to hear you like it!

I would like lot more levels, not one city only.
I like a lot the graphics and the game itself, keep up the good work mate

Thank you! The game it was inspired from was, for me and my friends, the Unreal tournament of it’s time in terms of fun.
But that was a long way back. BattleCity dates since 1985 and I first played it in 1995. Fun times them NES games

Oh! There’s going to be more environments and maps!This is the only one created so far indeed.
The way it’s being developed is by focusing only on functionality for a while longer. Visual style and implementing the 3d art pipelines have been set in stone already and it’s only a matter of time.
So focusing on what remains of the features and then creating more environments and maps to spread them within is next up!
I’ll make sure to update this post with new environments as they get implemented! It’s just going to take a short while until that happens right now. But definitely going strong on those! I’m an artist at core and I wouldn’t let the true fun out of my hands

This looks like fun!
Well done!
Just make sure you can still identify the the tanks in the middle of the battle.

This looks like fun!
Well done!
Just make sure you can still identify the the tanks in the middle of the battle.

I swear that is exactly the 1st thing that gets changes. + that the respawn color coding.

First step out of the way already, wow!
Next up finish the game. Easy =)))

I put together a fake-volumetric technique for all of TankYou!'s effects.
It looks amazing in motion and there are no more textures on this side either! Wohoo!

EDIT: This is the same shot from 2 different angles for a better view on how it behaves.

I guess I could say “Much excitement, such wow!”

Everything seems to fall into place, nice and steady. I’m going to have the game gold in about 2-3 days now.
Oh, that feeling of accomplishment <3

How many “Yes” votes did you get? Care to share a screenshot of your stats page?

Of course! Here’s the stats as they are right now:
The game got greenlit in 11 days. I haven’t pushed any traffic outside of steam - except a post about the Steam GL campaign on facebook, in the Indie Game Devs group(not sure how much it helped). 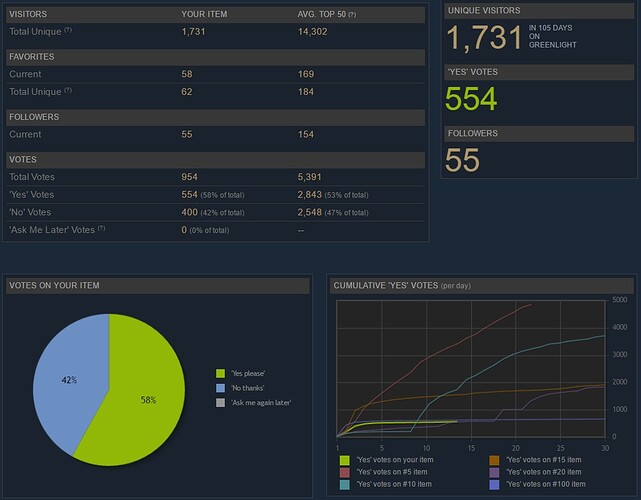 My personal conclusion about Steam GL system is that, ultimately the Steam staff approves all projects. The top 100 and yes votes are pure guidelines.
Feel free to shoot any other questions.

Thanks for showing it.