Switching music tracks with press of a button

Hi, I’m very new to using Unreal. I’m trying to create a radio/stereo/bluetooth speaker that allows me to change what song is playing from it when I press a button on a controller (this will be used on the Oculus Quest). I’ve watched some tutorials about sound cues, and I understand the basics of getting sound to play through the sound cue. In the sound cue editor, I tried linking up 3 music tracks to a Switch node. The documentation for this is very sparse, so I’m not sure how to make this work, or if the Switch node is even the best way to go about it. It looks like to change the song that plays, I click the node and change the “int parameter name”. I’m not sure how to go about creating that integer, or rather, where to do it. I can’t seem to do it within the sound cue itself. If anyone can help, or direct me to a tutorial that explains this, I would be very grateful. Thanks!

Yes, like you I am working with VR. I created a BP to swtich between tracks by pressing different buttons. I am not an expert and maybe there is a better way, but at least it worked and could of help for you : 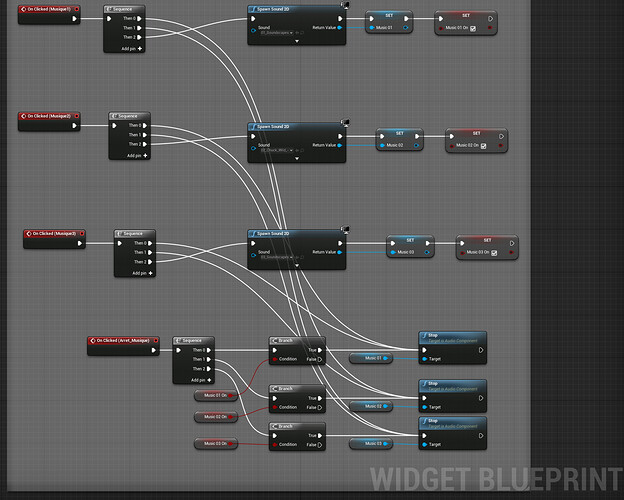 This can be done this way I think with Sound Cue . Note that you should give a name to switch node like “SwitchParam” in left up corner or anything and then spell the same in other blueprint.
You should have “Audio” component attached to actor. Certainly, you should limit number of stations, but I just give you idea about how cues works.

I kinda got it working with Sound Cues, but I wanted it to loop around to the beginning of the list of songs when hit Next after the last song. I came across another way of doing this with a Media Player and a Playlist. The media player doesn’t work with Sound Cues, so I had to create File Media Source objects for each song. The nice thing about that is the songs don’t have to be converted to a WAV file. It can use MP3s. I then created the Media Player, which from what I understand is what actually plays the File Media Source files. I also created a Playlist, and added the 3 songs to that list. And then I’ll post a pic to show how I made the blueprint. It works pretty well, and I can keep adding tracks to the playlist if I need to.

Now, I’m trying to get this working through a widget that pops up over the Radio object I have in my scene. I’m having a hard time with that, but that’s for another topic I think. 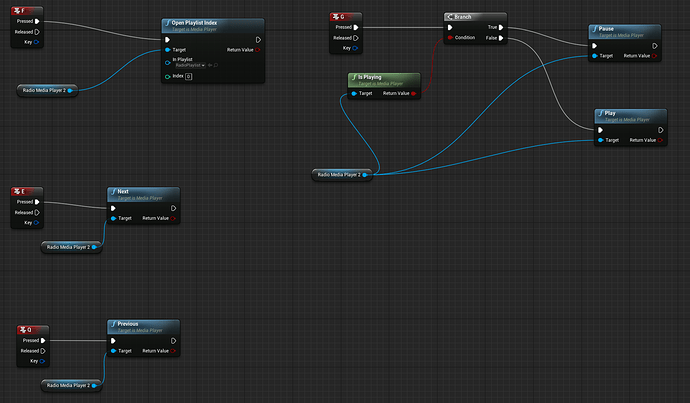