I would like to switch between cameras with blend like the function SetViewTargetWithBlend but instead to use CameraActor, I will need to use UCameraComponent (camera third view to top down view and inverse).

How can I handle this behaviour ?

Behaviour needed (instead CameraActor, I need to use UCameraComponent) :
[Switch camera at 6 minutes 20 seconds][1] 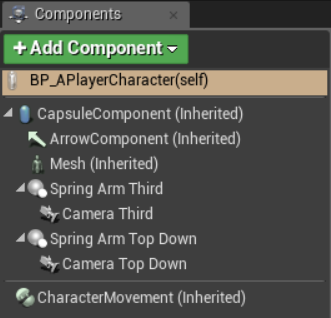 You can also take a lokk at my FPS/TPS template [HERE][2] , it may help you

I’m very interested in this solution, it’s very close to my own problem about changing player camera on this topic : How to switch smoothly between 2 cameras of 1 character - Cinematics & Media - Unreal Engine Forums

But I want to use only on camera, so I tried this BP but it doesn’t work :

Can anyone help me ? Thanks !
Guillaume

I know a better solution which I think is the best.

add a camera component to each of them.

make camera component the root component by dragging and drop on scene component.

attach child actors to spring arm and change the location of one of them.

on begin play of character BP set one of those child to be the default camera by set view target with blend and zero blend time.

then on press E key use a flip flop to blend between cam1 and cam2. by set view target with blend node and a none zero blend time.

Thanks a lot, i spend 3 hours trying to figure this out! I tried to make a transition between 2 cameras when the player died but couldn’t find out how to use view target with blend because he just didnt want to take my camera for his new view target. Your solution worked like a charm now i just need to find why it is tilting when transitioning.

what do you mean by tilting?

While ultimately this is a good solution, it’s highly recommended to never use child actors (PS4 won’t even compile them and Epic themselves state it’s best to avoid using them). A better (solution would be to spawn the actor then attach it to a spring arm component.

yes. I used to use child actors a lot and later I found out they are dangerous.

you can also spawn and attach those cameras instead of using child actors.

What about the newest version now? Is it still not recomended?