Hi everyone, I am currently playing around with the SidescrollerShooterKit and tried to use my own character with the player-blueprint from that Kit.

Inside the BP the animBP gets referenced as a objectReference-Variable and used in a lot of places. If i want to use my own character i have to retarget and create another animBP, but ofc if i use that with the characterBP the references don’t match up, cause the 2 animBP-Objects are diffrent. I already changed it out by hand once and that works (and in worst case scenario is a backup workflow) but it gets tedious.

Is there a way to switch out the animBP-References without having to go through the characterBP by hand and changing every get/set call? As the animBP’s are basically the same thing except using a diffrent skeleton, maybe i can convert them somehow?

Thank you all for the help ^^

Try to assign a hotkey to “Replace References” in the graph editor section of your editor preferences. I have tried this but nothing happens, maybe it will work for you. If you haven’t used it, right click on your variable and use Find References.

I don’t have access to the SidescrollerShooterKit, but it sounds like you’re going about this the wrong way. All your references should be the generic animbp type, and you cast that to your specific animbp type only when you need to access specific functionality.

If you need more help, could you upload some examples of what you have? It is hard to determine a better solution without knowing the hierarchy of your character and SidescrollerShooterKit animbp.

Thank you for your help. I am not used enough to the bp-conventions to say if the kit is doing it well or not. The Variable is getting set through a cast and then getting used later in the blueprint. 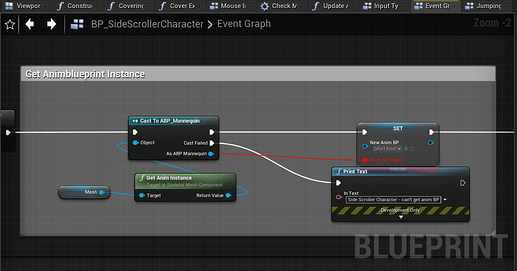 The blueprint has a lot of specific get’s for Bool-Variables like isUsingCoverSystem or the CurrentWeapon that is used (though i’m not sure if the animBP is the right place for that variable). 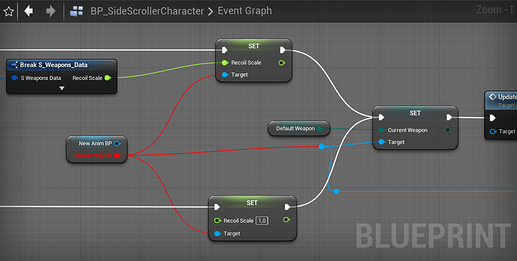 I tried your tip with replace reference. The hotkey didn’t work, but i was able to open the window in the bp-tap from windows-dropdown. Then it was a bit funky. If i make a new Variable with the new animBP and choose the original animBP for replacement, i can not choose the new animBP.
BUT if i first make the Variable of the original-animBP type i can choose that variable as a replacement, even though i have not choosen a source. If i then close the window, change the variable back to the new animBP, open the window again, the replacement is still set and i can choose the sourche animBP. To my surprise it actually did replace all references to the variable, BUT as you can see above, the variables used from the animBP dont get replaced. So basically its just a more complicated way to change the type of the variable without any gains. Or i made something completly wrong, which is also very likely XP
Sorry to explain it so confusingly, but it was a very roundabout way and i only got it to work by accident.

I also got the tip to make a child animBP and change the used skeleton. As a child all the references is the character work fine. But to then use retargeted animations i have to use the asset-overwrite-edit function and as i have found out in another thread that function is bugged since ca. 4.24 and doesn’t show child-animations for changes. And the earliest fix will be in version 5 T.T

If worst comes to worst i will do it all manually as it is a one-and-done type deal. But first wanted to see if someone already fixed this type beforehand.