On our next stream members of the mobile platform team will be discussing mobile development with UE4 and taking your questions about it! Learn about creating, optimizing, and packaging projects for mobile platforms. If you are making a game for tablets and phones, you better be here!

WHAT
Mobile team experts will be on the stream to talk about developing for Android and iOS.

Let’s hear your questions for them. Feel free to ask any questions on the topic in the thread below! We’ll get to as many as we can! 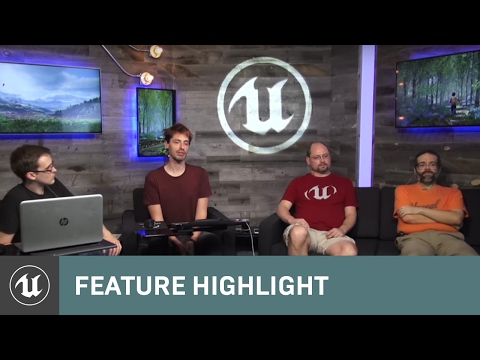 Hi
I think that the Twitch will be interesting !
Thank

Hi guys! If it’s not too much to ask, show us how to make In-App Purchase with UE4 for both systems, Android and iOS :D!!

i’m also intrested in extending unreal engine 4 to access all other mobile features like galery, camera, contacts, networkings…so that we can develop both mobile games but also next-gen apps

The below are in regard to future developments, specifically for Android

looking forward to this stream but I haven’t tried working with mobile much yet.
looks like most topics that will be covered but optimizations in mobile are very important along with file size.

Hope this question isn’t out of scope, if it is no problem
(I know there are options now available for targeting mobile but…)

[Question]
~ what I have been wondering, is it possible to make the engine more modular for cases like this, especially when targeting mobile platforms & even certain mobile devices?~

Thanks! Looking forward to the stream.

A bit hard to ask proper questions before you actually announce what’s in 4.8, knowing what’s already on the table would make asking (and answering) questions much more fruitfull.

I guess that would be it for now. All I can add is that all of these (and some other that are already announced/rumored for 4.8) are actually the areas/features that I would actually make a very good use of in my recently released game. As simple as it is, it is a great proving ground, and even such a simple project would benefit, if any of the issues mentioned above got some improvements.

A bit hard to ask proper questions before you actually announce what’s in 4.8, knowing what’s already on the table would make asking (and answering) questions much more fruitfull.

I guess that would be it for now. All I can add is that all of these (and some other that are already announced/rumored for 4.8) are actually the areas/features that I would actually make a very good use of in my recently released game. As simple as it is, it is a great proving ground, and even such a simple project would benefit, if any of the issues mentioned above got some improvements.

I agree with all of these, please answer!

This is very timely as the Mobile VR Jam is going on right now. In fact, this is the last week for it.

There is an issue with bluetooth controllers under Android (not limited to VR) where the D-Pad doesn’t work, and with some controllers the Right Thumbstick doesn’t work. I’ve detailed all of this here last week: https://forums.unrealengine.com/showthread.php?68380-Gear-VR-Bluetooth-Controller-Issues-(for-Mobile-VR-Jam)

This impacts all of us that are replying on bluetooth controllers for our games/apps/expereiences. Especially the Samsung EI-GP20 where the Right Thumbstick is non-functional. With only a week to go until the end of the Jam, it would be great if we could get a patch for 4.7.x to help out. I’ve read that JJ Hoesing had something he was working on to resolve this.

I just started a thread a couple of days ago about pushing Augmented Reality in Unreal:
Unreal, lets make some noise for AR support

The questions would be:
Could Epic help pushing the development of such plugins? Maybe by contacting Vuforia and metaio and pointing out that there is a huge interest of the community in developing AR apps in Unreal? Maybe Epic could even provide some technical support in developing such plugins…?

I would really like to see Unreal becoming a powerful tool for (mobile) AR development. The community alone might not accomplish that, but if Epic throws its weight into the balance, we might see some progress…

Epic, can you help?

Great timing with the Oculus Mobile VR Jam ending in a week.

**1. Highest prio we’ve a big problem with the following combination: **

These three together are currently not working - could we get a fix/hack before the end of the Jam (11th May?). PS: Strangely it’s working fine on my Note 4 with the Exynos chipset.
Without this many people participating in the jam will not be able to try out UE4 engine apps - not to mention the judges and Oculus store …

2. When can we expect proper Google Cardboard support? Hopefully with camera access as well for creating some AR stuff!?

**3. **Unrelated to the Jam but Android file size has been a big issue → we’ve had to manually remove slate files and other hacks to reduce the filesizes so far …

4. What is the general vision for UE4 and Mobile related to performance? Is it:
A: Keep the current performance aiming for higher end devices with the mindset that in some time even newly released next gen lowend devices will run the engine fine as technology improves and becomes cheaper
or
B: Introduce a new rendering engine or out of the box performance tricks, to support current low end devices knowing they have a limited lifespan

I’m quite happy with A as I’m a new technology freak - however I guess there are alot of people who are still expecting B … ?

5. Please make the IAP permission optional in the manifest file!

What is the best practice to light scenes for mobile?

Thanks everyone for dropping into the stream! I’ll see about getting some more answers posted here!

Unfortunately, I missed the stream. Any news on fixing bluetooth controllers on Android, especially the Samsung EI-GP20? We’re just days away from the end of the Mobile VR Jam and it would be great to hear about this from Epic.

is there a way i can tell unreal or my android phone to pretend to have 1/2 memory?

Memory on Android is garbage collected so if you go past free memory it tries to shut down apps and services to get more space. UE4 doesn’t check free memory, it just tries to allocate and will assert / crash report if it fails. Forcing lower memory can be done in a code project by just adding a big allocation at start to occupy the memory… since it is on the same process it won’t be GCed away so should behave like it has less memory.