Just another quick idea I had that could be cool:

You know how you can “Promote to Variable?”. This is helpful in cases when you’ve got like 20 things connected to the float output of a Tick / Axis of a input as you can keep your BP clean with wires not having to be EVERYWHERE.

But if you have a number of things connected to a float output of an event (Or any output for that matter!) - If you promote to variable, you have to go through and remove the link you placed before and replace it with the variable in order to clean things up.

Wouldn’t it be cool if UE4 would check when the output has been promoted to a variable, if it’s already connected to anything and if it is, set the input of whatever the output is connected to to the variable automatically.

I don’t think I’m explaining it very well, so let’s have some quick screenshots:

So it’d work like this, you have loads of things already connected: 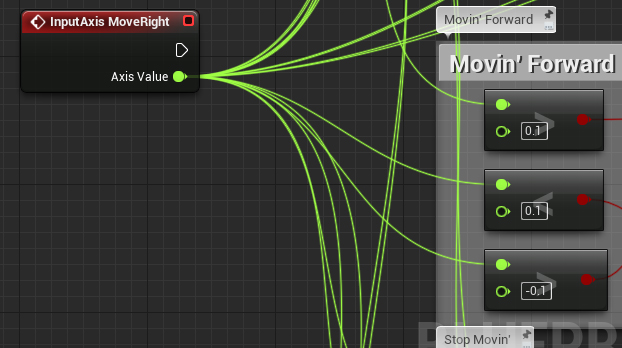 BUT when you “Promote” the output to a variable:

Now you must be thinking: What’s the point? Why no doing it manually? Well, as I already said: If you have one or two things connected to the output, doing manually would be fine. HOWEVER, if you had 20-30 things connected… Yeah, massive time waste

Especially seeing as the Blueprint can see what’s connected to the output already (Can’t it?)

Just an idea from the think-tank of my brain

Rule of thumb - create reroute node and THEN drag out value to billion nodes. If in future you decide to promote to variable there will be no problems at all

Rule of thumb - create reroute node and THEN drag out value to billion nodes. If in future you decide to promote to variable there will be no problems at all

Indeed! But my suggestion would make the BP EVEN cleaner than that

You can also use Ctrl+Drag to move a bunch of connections from one pin to another.

You can also use Ctrl+Drag to move a bunch of connections from one pin to another.

You blew my mind! I had no idea this existed; Thanks!

BUT - It’s still not very “Clean”! The way I had in mind Michael, It’d add a unique varible output node to each of the inputs that it was connected to before it was promoted to a variable. This way the user wouldn’t have 500 lines going anywhere anymore, just 500 Variable output nodes (Which looks a lot prettier!)

Again, it’s only really a cosmetic thing, but it helps things keep neat and tidy!

However, thanks for checking out the thread and blowing my mind at the same time, You’re the best