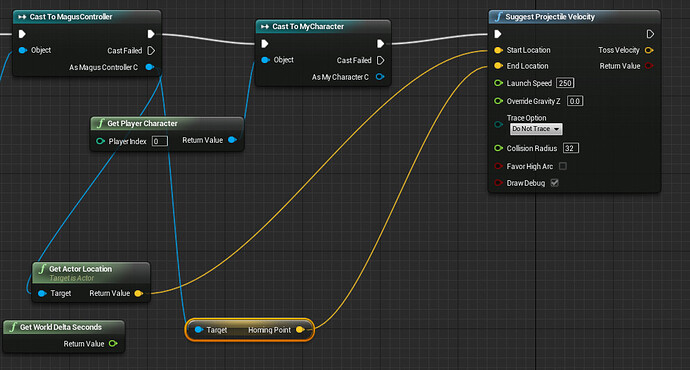 I have a line trace that picks up on players under the cursor, and returns their location (while under the cursor), which I had hoped would provide a reliable point to send the projectiles to.

However, when I attempt to use the node, I can’t get it to suggest much of anything. Should I plug toss velocity into a vinterp, and then into a move component? Or to a set actor location? I really can’t seem to get the desired effect with this node.

If this isn’t the best way of obtaining a homing projectile, could I get a push in the right direction? Thanks!

From the docs:
“Calculates an launch velocity for a projectile to hit a specified point.”

Calculates an launch velocity for a projectile to hit a specified point.

To me this means you use the resulting “Toss Velocity” as a single impulse vector to get your object to end up at the endLocation from the startLocation using nothing but the physics sim.

Perhaps akin to the Lobber Husk from Fortnite throwing projectiles at the fort in a high arc.