Using 4.13.2 suddenly many blueprint characters changed positioning inside the blueprint, without any direct action.

Can you provide any additional information about how you’re setting up the character or when the position change is occurring? Is this after compiling or adding a new component to the blueprint? Are you able to reproduce this behavior in a new project? If so, can you provide the setup steps to help me investigate the issue locally?

This asset was untouched by me, is basically part of this package Multiplayer TopDown Kit in Blueprints - UE Marketplace

I use a merged version of both. This happens when you abort the project via the task manager.

To reproduce setup this loop, upon play in editor, the editor freezes. Ending the project and relaunching the project will set some or all characters from the folder
MPTopDownKit / Blueprints / Characters as seen in above screenshot

Notice, crouching is not working as intended in these packages, hence why i try to do it differently.

The freeze is actually an infinite loop caused by the while loop itself. Even if you release your crouch button, it does not exit the loop to set the boolean to false. The condition to end the loop needs to be set within the loop itself.

As for the character position issue, can you reproduce this in a new project without the marketplace assets? If this only occurs when using the marketplace characters then it may be an issue with the assets themselves. If you are able to reproduce this in a new project, please also provide the steps used and/or a sample project that shows the issue occurring.

Okay, this happened two times, both times i had to quit the editor via the task manager. First i was shocked, because the character walked in the air and wrong aligned, since i figured it out, and such hard resets are rare, the issue is resolved for me. I just posted this here to bring attention to this possibility.

The pawns are easily realigned via a few clicks. Thanks for your response Wilson. Unless there are other users reporting similar issues this does not need more attention.

Thanks for explaining the while loop stuff.

Ok i’ve tracked this problem down, has nothing todo with crashing the editor.

It is caused by the Set Anim Instance Class node, when you load a AnimBP twice, affecting all NPC’s it seems randomly who have this AnimBP assigned to their mesh. 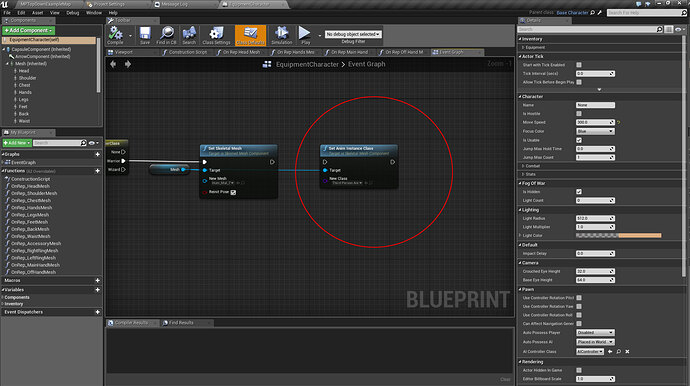