Ok I have no Clue on Where To post this at. So I’ll try posting it here.

What I’m doing is Streaming myself making a Touhou BulletHell Prototype Publicly Though Twitch using UE4.

I will try to broadcast what I’m making everyday around 6:00PM Central.

Right now I don’t have much to show And I’m just playing around with twitch trying to find my nitch.

Thank Ya’ll for those who came to watch the stream.
I have a Progress report of the game:

That thing with the Scene Capture and the cones is the Stage.
http://s26.postimg.org/fndjn0445/UE4_Bullet_Hell_WIP.jpg

-I’ve Change the player Character
-Added two camera components. One Orthographic and the other Perspective.

I have this Idea in my mind wondering what would a bullet hell Game would look like if it in a Perspective view. So I added two different cameras so two switch with.

-I’ve added a Floor Mesh With a Scene Capture texture for the Orthographic View.

-Enemys Spawn when the stages’ Capsule touches the Levels Trigger Boxes
I was Not to happy about how I got the Enemys to Spawn. Originally I wantted them to spawn on the Stage, but they slide though the Stage walls because they Do not have AIControllers when they spawn (Althought I do want them to Go though wall, so That was a happy Actident). I have to have the move along the stage just to get them to stay still. I hope I can find another Solution.

That about it. I might broadcast very early at 11:00 am Central.

Howdy Just a few updates on the prototype game

That about it.
I will be streaming the development of the game soon, but just for a while. I will not be available to work on the game for july 4-6 because I’ll be at RTX convention.

I have a recording of the Prototype up in youtube for your view pleasure. 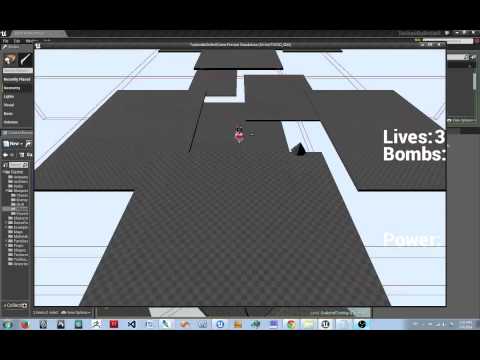 So Far the Game is coming along great. I now starting to notice the Lag when the enemy spawn bullets so that is going to be something I need to figure out. I have bullets hit the wall to get destroyed to reduce lag, but I wonder if there is something else I can do to help raise the FPS of the game.

I won’t be back to stream the game in development until Monday.

I haven’t Stream Much at all last week. I was a Missouri for a family reunion.

However, While I was in missouri I was working on a different Game For the ios And android devices.I’ll might post more information about that game in a new thread just to keep it organize, but I’m planning to stream the prototype and then Stream My 2.5D SideScroller game.