Perhaps I’ve been staring at my screen for too long, but I cannot for the life of me figure out how to simply stop my gun firing while reloading. My reload is a function that is called after a 2 second delay which is started when the ‘R’ key is pressed. I feel like I’ve tried everything and now I’m starting to really over complicate it. Could someone please point me in the right direction? I feel stupid having to even ask.

Hello,
Not sure of your bp but if i am not wrong if you use a “for loop with break” instead of “for loop” then you may can put a check on reload value at the end of delay and break if value is true. Player will have to click again

Edit : this if you need to stop actual firing, not prevent player clicking for new fire. Then as cafemaster said.

**Cafemaster, yeah I tried that, I can press the LMB once, after that I cant fire at all. If I set a ‘Reload’ node between the Released and the Set LMBPressed node, it’s stops me from firing which is good, but only for one LMB Press.

And Fen, that ForLoop is just for the BurstFire, there’s nothing else tied to it.**

It also might be worth mentioning that I have this setup at the end of my Fire blueprint. It basicly says that once a bullet has left the clip, only then can I reload. It stops me from reloading when I have a full mag. 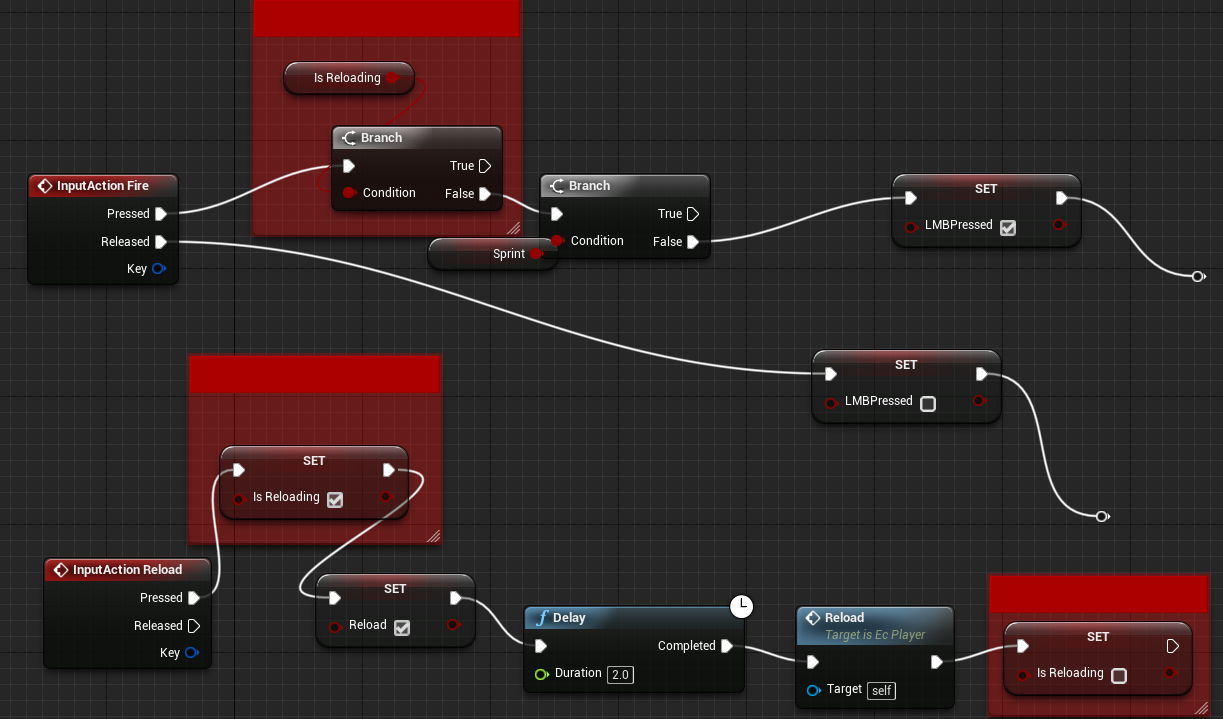 Bool or Gates… I prefer the latter as it doesn’t require another variable.
But the Bool is useful if you need to branch, or play a different UI sound…
Gates are useful if the game can ever have ‘vehicle’ weapons disabled.
Or as an in-game perk or due to temporary / permanent damage taken.

Yup that worked! Thank you! I think I need a recap on how to use some of UE4s basic functions, I shouldn’t have gotten this lost on something so simple. Thank you again!!

I have the exact same problem. @Griffo I know this thread is old but could you screenshot or explain which method you went with? I am trying to setup a gate for this and I am banging my head against a wall with it. (I’m semi new to BP) Thanks!