We are producing a upcoming stealth game called GAIN. This is a photo of the level, its very maze like. Some criticism would be helpful. 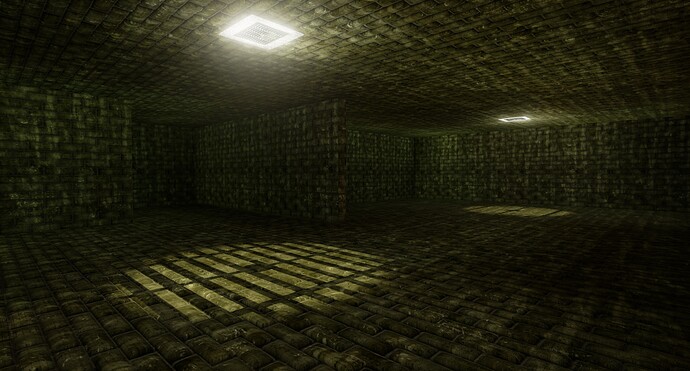 The texture/material on the surfaces could greatly benefit from some variation. I’m also not sure you’d ever see tiles that bulge out like the normals seem to imply they do (especially on the floor). You need some visual elements to break up the scene so players have more to think about the environment other than “Okay, this is a lot of greenish tiles”.

What sort of feeling are you going for? Horror? Scifi? Realism?

Realism is what we’re going for…

I agree with what you said but at the same time, there is still a lot to do in terms of lighting.

Definitely needs variation- there is nothing that catches the attention of the eye, in fact it is quite hard to look at- get some contrasting materials and have different textures/materials for floor/walls/ceiling- since you are going for realism, reference any real life place that you’d like to emulate- it most likely will have a lot of varied textures and surfaces!

A key element to stealth gameplay is tracking enemy movement. After all if you don’t know where they are, before they spot you, it becomes more a game of chance than stealthy navigation. What kind of mechanics will you use to give the player a chance to avoid detection? A maze will generally limit the players options as you are forced to move through pre-determined corridors.

The main issue here is the lighting, contrast it with a previous level we did before. The image is below. The lighting in our sewer level seems off and quite hard, Props don’t add to that much to the visuals off the game(lets not debate about this). Even if you remove every prop and building in GTA 5 and just leave the grass and sky, you would still get a beautiful looking scene. Look at Koola work, there is barely any props in his level. Any help with UE4 lighting/post would be greatly appreciated.

The game has many features that allows you to see where the guards are. Guards will be highlighted, sound etc. You can track enemy movement. Gadgets such as EMP grenades and magnets to steal keys off guard will be implemented. We have a few features but we’re more interested in producing a solid game instead of a bunch of content.

Koola’s scenes use photo-realistic materials that offer a bit more of a visual variety within the textures themselves , and reflections/specularity/detailed shadows help fill in the visual space as well. Not to mention that each shot is taken with the most flattering composition possible. Also all of his scenes do include secondary visual elements (some props, trees, windows). No, it’s not a lot, but it goes a long way in making it feel more real and alive. Immersion is very important. What are the guards protecting? Why are they down in the sewer? What kind of world is it? What’s the state of the area the player is in? Is it a slum with graffiti and garbage thrown about? Have refugees or homeless taken up residence in the sewer?

The reason people are bringing up the fact that the scene really needs more visual elements to break it up is because even once you have super nice lighting and shadows you’ll still have an empty space with only one tiling texture. Lighting won’t fix that.

As for issues you have with lighting/post. It’s hard to say. What is your lighting setup? The (what I assume are) lights in the ceiling themselves do look a little harsh, but the light they cast otherwise seems fine. You can create more mood (and thus a better looking scene) by maybe toning down the bounces and intensity and adding some more secondary lighting scattered throughout. A post volume is also a quick way to bring the visuals up a notch using an LUT map to help level out brights/darks and balance color; though I don’t have a lot of experience in how that will affect performance.

Don’t forget that how materials interact with, and react to, your lighting is just as important as the lighting itself.