Static meshes not captured by SphereReflecdtionCapture

Hi guys. I have have issues with either the speedtree imports or the SphereReflectionCapture. The speedtree imports are not showing on the glass surface on the building in the screenshot. I used the glass material which is in the editor as starter content so i figured that it is set up properly. As you can see it does show the terrain and the shadows from the trees (the trees are also behind the camera used to take the screenshot) but the trees are missing. Also there’s a dark line across the reflection of the terrain and i have no idea how to get rid of it. Can you help me solve these problems? 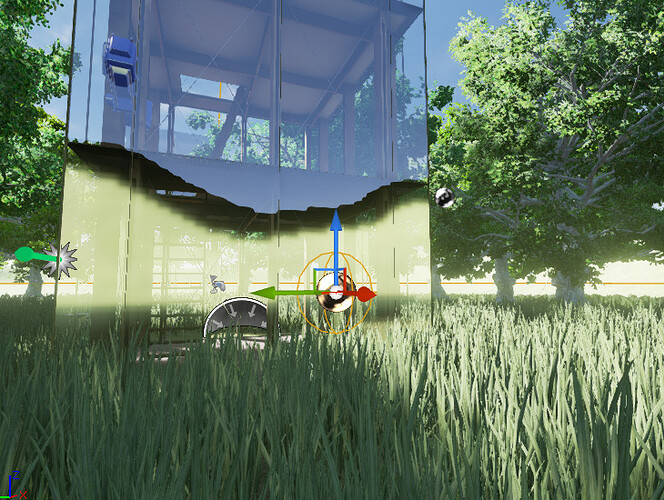 There is a known issue with using Sphere reflection actors with Skylights currently. This is what is generating the black line across the reflection. As far as the trees, I can think of 3 reasons that they may not be showing up, first, have you updated the capture of your sphere reflection actors, second, you may need to add another sphere actor with a much smaller radius to add detail to the resultant reflections or at least make sure that the trees are within the bounds of a sphere reflection actor. Finally, the trees could be being culled because they are not in the cameras view itself.

Try those and let me know and I will keep you informed about the Skylight/reflection actor issue.

Thanks Eric! I should have mentioned that the tree meshes are instanced. After trying the things you suggested I replaced some of the instances with the same speedtree meshes by dropping them directly into the level and these are captured in the reflections.
It would be cool though to be able to use the instancer and use that for optimized rendering speed. The instances that I was using was not set to be culling at a certain distance to the camera, so I’m now wondering what setting in the foliage tool i missed? It doesnt seem to be the camera culling the instances since instances that are visible to the camera also aren’t captured in the reflections. Also thanks for keeping me informed about that skyligth issue!

After some testing I have reported this issue, instances not showing up in reflections, to our engineers as a bug. I will keep you appraised of any developments.