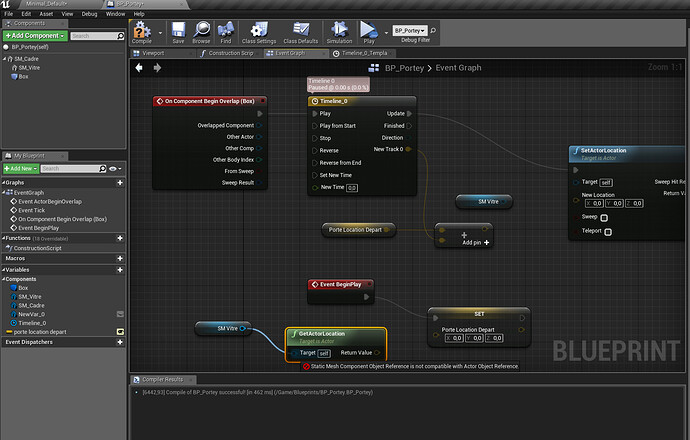 What am I doing wrong ? Thanks for help…

I am not sure, but I think Components don’t count as Actors. I think you would have to refer to the Actor the Component is a part of and get the Component from that Actor.

So instead of GetActorLocation node, try GetComponentWorldLocation (it’s called something like that I think. I don’t have the node names memorized) instead.

components are not actors they are pieces of an actor. if you add a static mesh into your scene directly it gets the actor functionality added to it so it becomes an actor, i think of it working like encapsulation.

anyways to solve your issue you need to use either the set world location or set relative location node. you can get nodes like this by dragging off of the component and searching for get location, the context sensitivity will find you only nodes that can be connected. personally ii would go with a relative location if you have a set amount that you want the door to move since its easier to define its movement in local space rather than world space. the below picture shows how to set this up using the relative location. i also show the setworldlocation node as well. note however in the example that the door mesh cant be the root component, instead use a scene component or something that wont be moving as the root.

Thanks a lot for these very clear explanations!