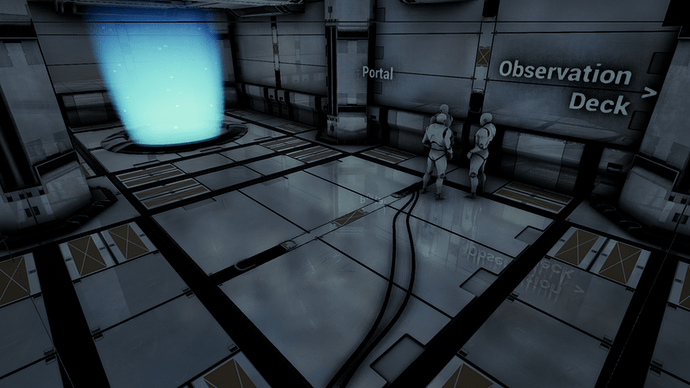 Hello and welcome, StarDungeon is a passion project of mine birthed from my trying to learn the engine and find where I fit in my post college years as a game developer. The project has changed pretty drastically from my new years 2014 start date and I’m quite proud of what I’ve learned and been able to put together. This project has been put together by myself and is mostly written in c++. Feel free to comment with any questions or feedback and I hope you enjoy StarDungeon.

Check http://stardungeon.tumblr.com/ for instructions and to download the latest build.

Very nice job! I can really appreciate the work put into this

Seems like you have a good base so far!

One question, however. Do you plan on doing a cover system?

One question, however. Do you plan on doing a cover system?

Thanks for the feedback Steven! To answer your question, no I don’t plan on adding a cover system. I was influenced a lot when prototyping the combat by games from my childhood like Battlefront or Socom.

Nice start ! I’ll keep an eye on it! Keep up

Instructions : Download the build linked and unzip folder. Ensure you’re signed into steam. Select SD.exe and allow the build to play through your firewall

Description: Wanted more control over inventory with this build as well as some fixes for persistent character data items.

The space ship looks really good though I’d be glad to see spaceships that really made sense in their structure. It is apparent that this is very early in development but I guess the space ships will vary in size and structure? Will you also have the standard solo/local co-op/online options available in the end?

Hi Markus, The levels currently are mainly set up for testing the various features I’ve developed thus far. I’ll more than likely keep the levels to being the interior of these ships. To make a comparison with current games that are out I imagine the levels being a bit of a mix between games in the Phantasy Star series and perhaps dungeon of the endless or other rogue-likes with large dungeons to comb through.

With Regards to the coop options, Currently there is only the ability to host a coop game through Steam. I would love to add solo play and local coop eventually though with playerdata persistence currently being what it is this may take some time. Hope this paints a better picture and thanks for commenting! Make sure to check back for the next build!

Description: A focus on network play and seeing what kind of level scale works well with it.

Wow, this project has come so far since I last checked in!

Good job on the mechanics, they look very tight and responsive!

Whats the progress on this game?

Hi Steven, Sorry to not reply in so long. I took a bit of a break for a few interviews I had as well as some of the cool spring games coming out. Still working on stardungeon, I’ll have to put some stuff together and make a new build soon.

Awesome, keep up the good work!

Check http://stardungeon.tumblr.com/ for instructions and to download the build.

Description: This build I took a bit of extra time to really get into some of the concepts I’d been wanting to test out and “discover” where I wanted to go with this project. There are plenty of things left to do though I thought it was time to create a build and get some testing done.

Notes:
The only ways to heal are “L” (cheater button) and energy core, when in range.
Difficulty controls enemy health, enemy count, and Gem drop rates

So I tried playing the demo and setting up a session gives me a big ‘error creating session’ message, how do I get past this?

Hi Steven, With sessions breaking I’d check to make sure you’re logged into Steam. Typically you can make sure steam’s dlls are working properly by seeing the steam overlay while in the game. If you’re still getting issues let me know, I appreciate you looking at the game!

Yeah, steam was the problem!

I played through it, and it was all pretty smooth for a pre-alpha!~

I can see some places that you should prioritize, mostly AI and better level design. I got lost many times, and it’s because each room looked the same. A good way is to put landmarks everywhere. They could be as simple as a colored cube in main rooms for now. It’s always good to have little side paths loop back to a main ‘colored cube’ room so players can easily get their bearings!

But I digress, this is all really excellent work, and there is a good framework here. And the fact that this is all happening over a network is ever more astounding! Keep up the good work!

Currently the levels are created with my prefabs for my hallways, so they look pretty generic.

The next update is all about enemies, so stay tuned!

Hey there! I found your old demo and fired it up again, and played online with my friend. We had a blast!

Have you updated the game at all?

Looks similar to SurvivalGame by Tom Looman? ? Used as a base / learning project?