I had modeled this speeder from Star Wars Episode II a while back and I had always wanted to put it into a game engine at some point. So I finally went ahead and made a low-poly model and brought it into UE4. Here’s some nice static renders:

I also wanted to set it up for gameplay and I really liked how the Sparrow vehicles control in Destiny so I tried to make something similar. I worked off some Blueprint templates for the controls, and got some cool little things on there, like the controls moving and the exhaust matching your speed, also got the antennas to have some physics when you move around. 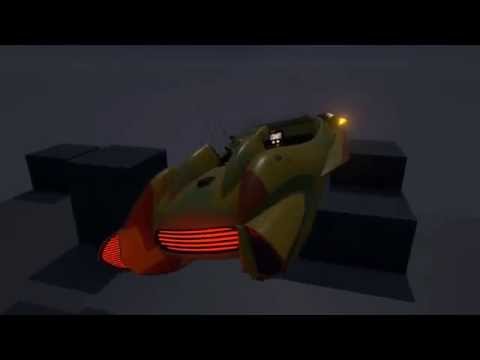 At some point I’d like to add a really nice environment level for it, like in the movie but it’s a lot of work to make a bunch of buildings and traffic and stuff

being a StarWars fan i’d say that looks the part all the way.

just add it to jacky’s gta

ps next a Pod race

being a StarWars fan i’d say that looks the part all the way.

just add it to jacky’s gta

ps next a Pod race

If I had a choice of game projects, my #2 choice would be remaking the N64 Podracer game, so fun (#1 would be a Serenity/Firefly game)

“I couldn’t find a speeder I really liked”

Maybe you could do a short-movie of the sequense where they hunting the changer?

Nice work, maybe Ill try to do some Star Wars stuff myself

Very nice! The N64 pod racer game was a favorite of mine as well. Spent so many hours in that game. A UE4 version would be impressive!

Very nice! I love the attention to detail, down to the antennae springing back and forth.

Thanks
I figured out the antenna stuff from the Vehicle Game example.

Oh lord, that looks awesome and the speeder/camera movement looks well too .

Would you mind sharing some of the setups?
And i would love me some information about the model itself. Texture, Vertcount, Wireframe view

“…I had to make a [new] skeletal mesh that had the speeder body and the antenna together.”

Oh lord, that looks awesome and the speeder/camera movement looks well too .

Would you mind sharing some of the setups?
And i would love me some information about the model itself. Texture, Vertcount, Wireframe view

There’s perhaps more geometry than needed, but I wanted this to work in VR as well so I needed some of the extra detail for things like the controls.
Poly count is 66,257

Here’s the main part that controls the camera location with axis specific lag:

The camera is on a Spring Arm attached to the Root, the speeder is on its own since it’s using physics for movement.

The rest of the movement I started with using this: https://forums.unrealengine.com/showthread.php?946-Space-Shooter-(Starter-Kit-Tutorial)

And how did you make the texturing?

For texturing it was a combination of things–in some cases with the yellow/green/orange colors I was able to select polygons and just apply a material color and then bake that to a texture map, I also cut the mesh sometimes so that I could create the lines the way I wanted (it was sometimes easier to do that than to paint lines in Photoshop).
Other times I just used Photoshop, or I used the Viewport Canvas tool in 3ds Max to paint directly to the meshes. That was all done on the high-poly mesh, the low-poly mesh was just baked from there. I found though, that Vray does not do well with baking textures, especially normal maps so I had to do a good amount of work to get the results I wanted. For stuff like specular/metallic/roughness I found that very very small changes in the color values made big differences in the material.
Also, the specular/metallic/roughness textures were saved as a single texture map, spec in the red channel, metallic in green, and roughness in blue.

Nice work! Although I would have preferred a model from the old trilogy, maybe next time

I’ve saved up a bunch of references for that stuff—Millennium Falcon, Blockade Runner, AT-AT
Don’t have the time to do them though.