I can’t seem to figure out why my packaged build does not run. Immediately on startup an error box appears saying “fatal error” with no other information. I’ve tried fresh builds with both development and shipping configurations, both with the same result.

In order to better assist you, we’re going to need some output logs. Please upload them as a .txt file.

What output logs would you be talking about? As I mentioned it simply crashes with “fatal error” and no other messages or logs. 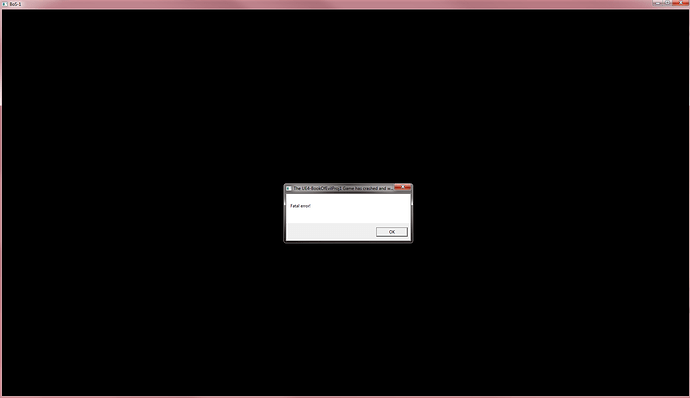 There is one text file in the packaged folder but it is created when packaged, not after runtime.

You can find the log for packaged game here: WindowsNoEditor/ProjectName/Saved/Logs

I’ve run into an error like this once before and it was caused by some random broken cached blueprints or something of the sort. Removing the intermediate and saved folders to refresh the project fixed it from memory.

When I package the project I can see it referring to assets that have since been renamed or deleted, and I did delete all the folders except source, content, and config, and rebuilt from there, but I’ll try again.

The logs should reside in the Saved > Logs folder. Also, if you’re noticing that the naming conventions haven’t changed, you might want to delete your Intermediate and Saved folder (after you’ve gotten the logs out) to see if that helps any.

The output also gives me warnings that don’t show up in the editor (Warning: [Compiler AITASK_Worm_BurrowBasedOnDistance] Warning ‘Enemy Worm’ does not inherit from ‘Enemy BP’ ( K2Node_DynamicCast_775 would always fail).) when Enemy_Worm DOES inherit from Enemy_BP

Okay after the rebuild in Development mode it has now created a log in the packaged folder (but doesn’t create such a log when built for shipping which is why I was confused before). My log for the packaged version is attached here

I actually had it working yesterday that’s why I had the slow response, but apparently I broke it since then. One of the things I did was change the startup map so I’m going to try a few more things. I’m also going to build with the crash log included as hopefully that will give me more inf

I ended up solving the problem. My MainMenu map was causing the crash. When I exported only my testlevel and set that to the startup-level, I was able to run it.

I created a simple empty level and tried that with my menu and it worked, clearly something in my test level was causing the crash.

Basically if you encounter a problem such as this try to slowly cut out everything that could be causing the problem. Start with an empty level only, then try one of your levels, if the empty one works but not your level then it’s something in the level causing the issue.

If someone can still comment on the weird warnings I’m getting it’d be appreciated.

I have same problem. Level causing a problem but I don’t know why.