So i’ve got a problem that i do not fully understand
an example is football or basketball:
if a player got the ball and passes then the ball should go to another player and he becomes the moveable character,
my question is how can i make those animation for tricks? so if Ronaldo does a rainbowflick, do i need to animate it in an animation software like maya or blender with a balland then put it in ue4?
because the ball will be an object in ue4, how can a player do a trick and then pass to another player?
I cant explain it very good but i hope somebody could help me with this question?

In order to create a sports game like FIFA, or any other ball sport related game where there ball is being passed around between dynamically moving player; you will definitely want to have all the animations done in an external program and import them into the Engine.

How I would go about doing this would be to get all of your basic animations like walk, jog, run, sprint, etc… and apply them to all of your characters. Unreal 4 has a great system for not only importing animations and creating a ‘Blend Space,’ but also re-targeting the same animations to different characters.

A ‘Blend Space’ is essentially a blend between to animation states given a constant or variable speed applied. For example, say I have an idle, walk, and jog state. You can set up ‘Blend Space’ to smoothly blend the transitions between your animations. 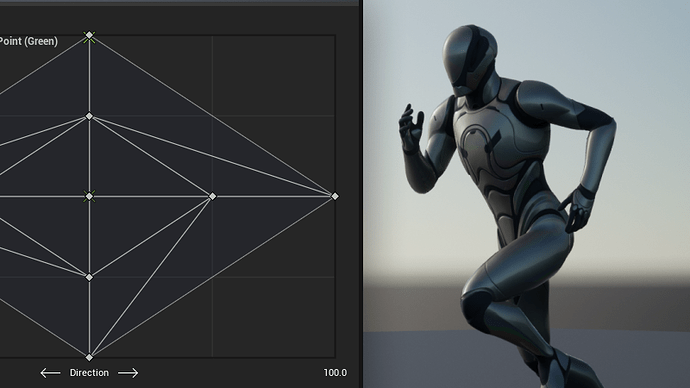 Blend Spaces are graphs where you can plot any number of animations to be blended between based on the values of multiple inputs.

The creation of the ball, if you want realism, will be a more difficult approach and will definitely require some programming. To give you a nudge in the right direction though, you will first want to establish separate states for the ball. For example, the ball is possessed by a player, the ball is being passed, and the ball is free or possessed. From there you will probably want to establish how the ball looks and feels when ‘attached’ to the players hands or feet. Making your ball a physics asset and applying basic rules and the constraints to which it operates would be a good approach.

All about collision, collision responses, and collision presets in Unreal Engine.

Hopefully this can get you going in a certain direction towards your goal. Always keep in mind when designing, which parts of the game are the most important, and designate your time to that first. If you can get your game functioning how you want, the polishing and perfecting comes next. Keep in mind this game will need to have AI implemented to know how and where to move about the designated world space.

Thank you for the fast and long reply its very helpful !

It is good to hear that sports will broadcast the movie. I do not know what the purpose of this movie is but it may help to the people who want to play the games of this company and www.edubirdie.net/ site is the best option for me. I think it is good for the future of this company.