[THE GAME]
SPLIT is an sci-fi indie puzzle platformer set around the players ability to switch between dimensions. It is based on the multiverse theory which states, that there is an infinite amount of alternate universes being slightly or even completely distinct from ours. The main objective is to solve puzzles in a rather strange environment. Different types of cubes and the main ability to switch between dimensions offer challenges requiring both logic and dexterity. [STORY]
Set in the near future, a spherical entity arrived on earth. The proportions are beyond comprehensible sizes and it seemingly came out of nowhere. As if that isn’t enough, you’re assigned with the task to explore its inner core…
… finding yourself in a never seen before environment. It almost seems like it’s filled with an array of test chambers but why? What happened here? Who built it? And why can you switch between Dimensions? Key components of the story will be dimensional traveling, environmental exploitation, technological evolution and trans-/neohumanism. 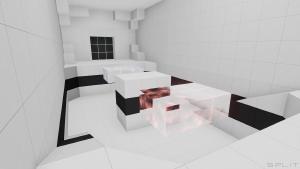 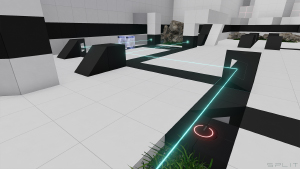 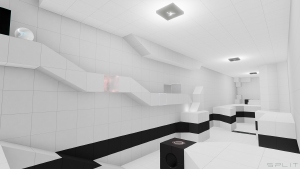 [WHAT HAS CHANGED]
While the core about switching dimensions remains untouched, some of the other features have been either changed or even been replaced. For instance the electricity induction is no more, while moveable cubes, spike cubes, laser cubes etc. have been added. The former skills that could be used anytime (slowmotion, invulnerability and teleportation) now have to be collected and then put into a queue. Besides that the style has been altered a bit meaning slightly different and new cubes, new lighting and a redesigned, though yet not final environmental background. Still, most of the work since the last news item has gone into programming the new features. Some of them have been so extremely difficult to realize… but anyways. This is but a fraction of what is new since a lot has happened under the hood as well (features, story, engine etc.). The important thing is: SPLIT has become an alpha and the level design process has begun. (previous thread)](SPLIT - an indie puzzle platformer [Pre-Alpha Prototype] - Game Development - Unreal Engine Forums) 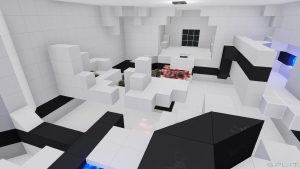 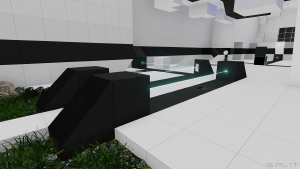 [DEVELOPMENT & PATREON]
Trying to partially finance myself I’ve started a Patreon campagin that works as a blog. Even if you don’t want to support me it’ll feature some more in depth information about the development process, though every donation is much appreciated and will be rewarded with exclusive news and articles (sorry for the shameless advertising

Now please comment, give (constructive) feedback etc. This is the game/project of my life and I’ll be needing all the help I can possibly get!

Looks great. I cannot wait to see more. Will you be releasing a demo or a playable build anytime soon? My only constructive feedback is that it would be cool if you could actually pickup and move the cubes around(using physics). The cubes could then snap into place when they are near a snap point.

Hey, sry for the late reply (time difference US/Europe).
A demo is not in the works, though I was thinking of releasing a version of what’s displayed in the video. It may happen in the future but not before I haven’t figured out a few other things more urgent.
About the moveable cubes, I once actually did create a system like that and it worked fine so far… if it weren’t for some weird clipping issues going on. Also, and more important, carrying stuff can make you super sick in VR. And since SPLIT is being developed with a native VR support and optimizations, the current approach was much more comfortable for the player.

Getting sick because of VR makes sense. However, I think you need to add something that lets the player know they have picked up/can move a box. For example, maybe the player absorbs/collects the box (visualized by a disintegration effect on the box), and when the player is near a snap point for the box, a transparent box appears showing that the collected box can be placed there.

Do those lights on the ceiling provide all the light? How are you getting it so even?

This game looks utterly fantastic. I can’t wait to see more about it! I love the concept and simplicity behind it which really opens the door for some really great and crazy puzzles.

The concept and the core idea of the game is pretty great and nice. Smooth moves and good lighting. My only concern is the difficulty of the game, you’re in room 5 and it felt like one of the advanced rooms in Portal. I hope you work on this and not making it a next-to-impossible by the end of the game.

@drb1992: Yes, a kind of a dissappearing/appering visual fx is planned.

@cDub: The lighting actually consists of two stationary directional lights with no shadows and a high indirect lighting value. On top of that are the lights on the ceiling that are static points lights with no shadows as well and a high intensity value to add some high-lights (+ the blue “energy” and some decorative cubes are also used for lighting highlights).
@Ahmad96Ragab: Yes, the last puzzle is very advanced but still a showcase and such difficult puzzles will appear later in the game. For the story there will be a well balanced learning experience to challenge the player while not overwhelming him. Speaking of next-to-impossible: something like this will be there but only in form of the challenge maps.

This game looks cool. Interesting idea, and very nice graphic. I just want to advise you to pay more attention to the main character, not just the scene objects like balls, it should make game more dinamic/active. Thats not all. Another advise is for average and high dificulty levels. Make the boxes(and other things) what located in blue dimension fully invisible for player while you in red one, i think it will be more interesting

I hope my advises was helpful, anyway good luck in game dev)
PS. Sorry for my Eng, actually its not my native, but i tried