Source not available while debugging with AGDE？

It seems I can get to my code but not the engine code… Here’s a simple test I did, I’ve got a trigger box in the scene that crashes the game on overlap. When it crashes, it reaches my code as expected:

But if I try to see some unreal’s function in callstack, it says source not available… 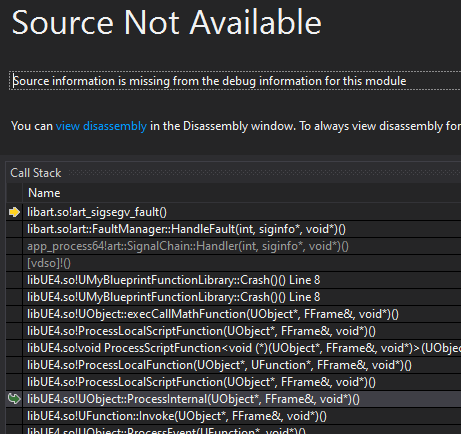 Has anyone else tried AGDE? I mean it seems like a great improvement compared to the old Android Studio workflow (Android Debugging | Unreal Engine Documentation) but it is basically unusable…

At least you were able to connect AGDE to the device. Mine says there are ambiguous two processes (?!). I am trying to debug crashes on Oculus Quest 2, and was able to see a stacktrace using Oculus Debugger for VSCode or Android Studio. Yet, as well as in your case, no engine sources are displayed in any of those debuggers.

I was able to find time to make a source build UE4 (instead of the launcher version I was using before…) and debug my project with AGDE and it worked as expected. No more assembly (that is until I reached some Android stuff…)

As for the ambiguous two processes, I have a cloudy impression that I’ve seen this. IIRC it was just 2 processes on my PC trying to debug the same Android device. Just shoot the usual culprits, Android Studio, UE4, any commandline running adb, etc. But whatever it was that I encountered, it didn’t bug me very long so I’m not certain it’s the same thing as yours.