[ Solved ] Set Widget variable into the same value as the player variable.

Does anyone know how to do this? Thank you all for your attention. An image should be below. 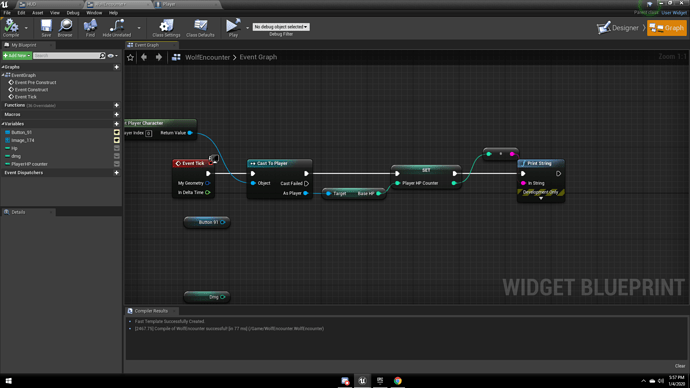 Does this print anything? Even if it’s an incorrect value.

No, and that’s what is even weirder. Because if the value simply did not update, it should still print = 0, but it doesn’t. The whole line simply doesn’t work.

Actually, connect the output of the Get node to the cst faild so you can see what it is if the cast is failing and prints something

Doing what you suggested resulted in a print, seems like the cast is failing. Any idea of what might be causing this? If it helps, I have another widget BP set up with a cast to Player as well, could that be causing some sort of issue? (even tho I doubt it)

Have a look at your game mode, what is the default pawn there?

I have managed to fix the issue. While the blueprint up above was just something I was doing for quick testing reasons (I wouldn’t use that setup for later) the issue itself relied on the game mode itself. I had created the game mode and it was set up correctly, but I had forgotten to set the custom game mode in the level settings. It wasn’t using the correct game mode. Thank you for your patience and help on the matter and sorry for wasting your time with such a simple error. I hope you have a great day!

What did it print when you connected the “Get Character Node” to the cast failed print string?

What it prints is what you should be casting to. Is your “Player” Variable a blueprint of the Character type? Is your player pawn even a character blueprint at all?

I noticed this i a widget, and you are using tick to update the player’s HP?

If so, this is generally a bad practice, may be ok for a small simple game, but a bad practice none the less. Another bad practice is binding widget values to variables as they are checked for update every tick. The better method would be to update your entire UI HUD once every tick. What I do is create a Struct with all the variables as a Map. The map is the variable value and a boolean (boolean is true if needs updated). Then, at the appropriate time in my code, I run an update UI HUD, which updates the widgets that need updating. If this i too complicated, a simpler method would be to update the widget when the value changes. So, create a function “Update Health” on your widget, and whenever your character takes damage, call that function with the new health value, that way you can avoid tick.

If you have the Pawn that the widget corresponds to create the widget when needed, you can save it as a variable and you have instant access to taht widget and/or widget object to change the value when needed.

Consider converting your comment to an answer and accept it - someone will eventually run into an issue like this.