Okay so for the past hour or so I’am trying to figure out why my blueprint isn’t event getting called.
Firstly I was following a tutorial so I’ve either made a mistake or the teacher may have

I didnt wanna ask for help but i feel as if i cant seem to find what’s wrong.

Hopefully someone can give a little insight to my issues? 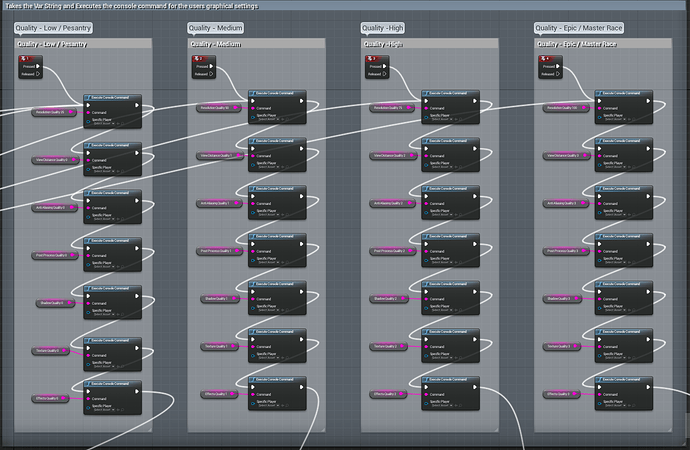 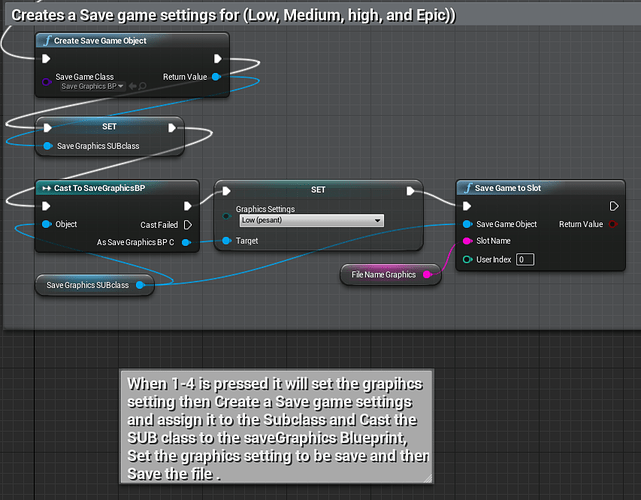 Are you sure you se you PlayerController class as default PlayerController, also i things like quality settings should be in something more global like GameMode atleast.

Gennerly this should be saved in settings ini, you can do that easilly in C++ with UGameUserSettings:

Stores user settings for a game (for example graphics and sound settings), with the ability to save and load to and from a file.

but those are not exposed to blueprint, i think calling console commands is more effcient in blueprint only project

Okay so what i missed was that the Default player Controller was using the default one And NOT the new player controller i created. Is there a was to reference the default and the one i created? or would i merge the two together?

I will however take a look into the link you have posted as i’m well aware that C++ is so much better than blueprints from what I’ve seen the minority say.

Never the less thank you very much!

Following that tutorial and a few others is really helping me with blueprint and learning how to use it . Thanks again dude much appreciated

As far as I know, you can’t “merge” two player controllers without actually taking the graphs from both and merging them together. If you want to use two different player controllers you would probably have to setup a custom spawn system, and even still each player would allow be able to have one type of player controller at a time (unless you modified/ created new playerstart actors of course.)