I’m currently doing a bit of reserch for a new project and I’m quite unsure about how to assign some soft body physics to a nonhuman character The deal is basically that the character is a 3D biological cell and should have some soft body properties. In general the cell should deform at collisions with rocks or other (static) meshes. Something like the deformation of the tongue in the video below:

(*Video is one of the official Tendr videos)

I have found a pretty promising physics plugin called “Tendr” (http://tendrdynamics.com/, Video above) which is currently in development, but the preview is only available for U4 4.8 and doesn’t seem to be available for my custom purposes. I’d like to ask you wether somebody has already expierience with such soft body physics in U4, if such collisions are even possible in the current 4.9 / 4.10 versions and if that’s the case I’d be very grateful for some advices. 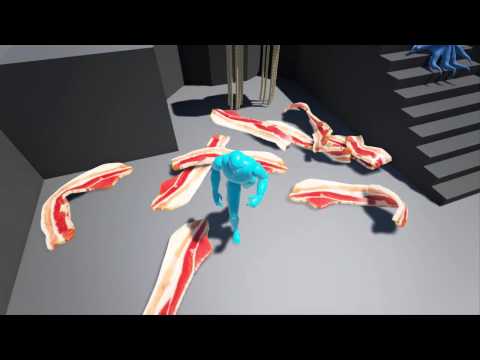 Well that’s what i was worried about… I’ll give that Flex branch a closer look, thanks for the fast reply.

Alternatively, if you’d rather not go down the Flex route (I believe you need an Nvidia GPU to use it) you could always fake soft body deformation using the material editor in UE4…

Roel has demonstrated this and even been kind enough to explain how it works here: Distance Field Soft Bodies - Rendering - Unreal Engine Forums