Finally I am close to finish the first demo of my game about War in Palestine. I decided to don’t release it in Early Access, instead I plan to release a full game so whoever purchases this game will have a finished and polished product.

However I decided that during the development I am going to release some free and small demos just to keep people in touch, test and also to give me a feedback (think a kind of Free Early Access).

I am trying to recreate this cool effect from Sniper Elite III Game:

For now I just want to recreate this effect for a cutscene in Matinee, later I will see how I can do this in-game.

Now just to add that extra spice for this effect

I would like to make the heart beating. I am using the default UT3 Skeleton for all my characters, so I can’t add an extra bone for the heart.

I think the best option for this is to make a material animation, vertex animation shader inside the material editor. All the internal organs are separated meshes skined with absolute influence to the closest bone and each organ has its own texture and material. The heart here is skinned to b_Spine2 bone.

I know how to make foliage move with wind by using the world transition offset, however I don’t know which function can be used to simulate heart beating, pulsing, but I know it’s possible:

Unfortunately, this guy did not say how he achieved this effect, his material setup can’t be seen very well on that video.

Thanks for all support guys

**Thanks bro for this comment! It helps make me motivated for this project. **

I don’t show too much often of my game, because I want to show off something worth seeing and playing to all people.

I plan to release a free demo on which you will play the first mission, however, on the final game I will make many changes and improvements for this first mission.

And whenever I release this demo, I will already have setup a youtube channel on which I will upload many videos, like the Game Intro and History Trailer, the Gameplay Trailer, and a Teaser Trailer on which I will make this sniper kill xray effect.

Also I wll setup a website, blog, facebook, twitter, instagram and steam coming soon page, for sharing the development of my game, and give people some tips, some mini tutorials on how I have done such and such, aswell some making off screenshots showing the animations in 3dsmax, MotionBuilder, some promo renders, and so on, like a complete and professional game studio does

As for the heart beating vertex shader, I was able to do some placeholder effect using WorldPositionOffset and taking an idea from this hourences tutorial: Hourences.com – Tutorials – UE3 Light Function

Flashing and pulsing lights
[HR][/HR]
Making a light pulse is easy. Set up a material as shown below and you’re done! As explained in my material tutorials, the Sine and Time will make things pulse. The variable inside Sine controls the speed of the animation. 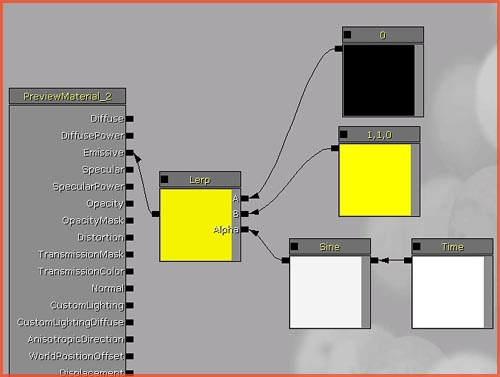 So I have done this:

The heart now moves slightly up and down and on the diagonal (45 degree), I made the movement very light, so it gives an impression of heart beating, however it is not what I want. I need that the heart expands and compress slowly, just like that youtube tutorial.

I don’t think you can change the size of anything with a material… Unless you’re doing something crazy with bump mapping and silhouettes. I think it would be a lot easier to make the heart beat with a skeletal mesh animation or changing the scale in code.

I don’t think you can change the size of anything with a material… Unless you’re doing something crazy with bump mapping and silhouettes. I think it would be a lot easier to make the heart beat with a skeletal mesh animation or changing the scale in code.

Thanks man for the tip!

However, I just would like to know how this guy have done this:

I don’t know how exactly he did that, but it’s probably in my “something crazy with bump mapping and silhouettes” category. You can follow this…

…to get the basics down. But I still think a skeletal animation or code would be easier.

WOW man, that’s crazy! You are right, I think skeletal animation will do the job. I have seen the youtube channel of that guy, he is a professional game dev, who worked on many AAA games, his last work uploaded to youtube was the VFX he has done on game payday, that guy is specialist in shaders and VFX effect, so I am sure he has done** “something crazy with bump mapping and silhouettes”**.

Anyway, thanks for the tip!

P.S: Did you solve the problem with fracture meshes for your game?