Snapping objects to a target point?

I have been able to snap objects for inspection to a target point placed in front of the player camera by attaching to component, within a blueprint interface. (see ‘first_screenshot’ below). I have done this by overlapping box colliders; one in front of the player been overlapped with one wrapped around a ‘pick upable’ object. Then right click and it snaps to the target point.
I would prefer this to happen as a result of a line trace hitting the collider wrapped around the pick upable object. So I put an attach to component script inside the event graph. (see ‘second screenshot’ below). It is working but cannot figure out how to make object snap to taget point ? Any help would be much appreciated. 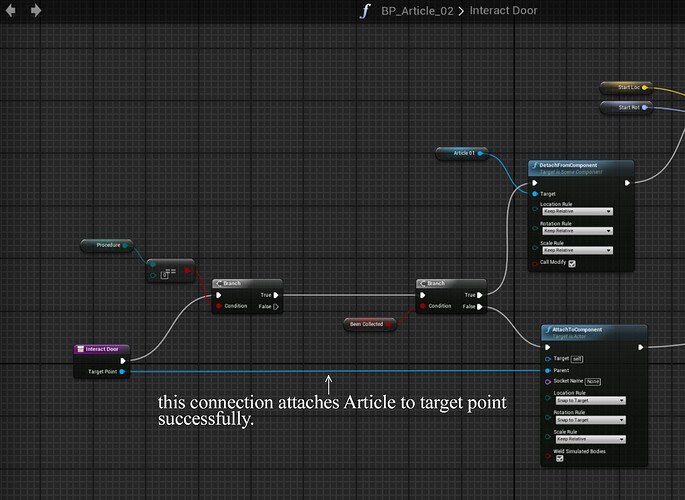 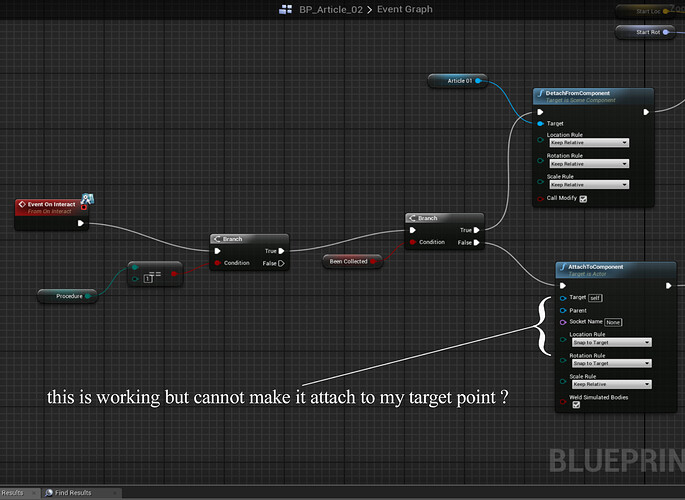 What if you made a variable on each item class (or their parent class) called InteractTargetPoint and when the player hits them with a trace it can set their variable to the target actor, and then on right click it calls that interface function which can have that variable plugged in where you need it.

As I’m fairly new to blueprints I don’t really understand your suggestion. I’ve been battling with this for a couple of days now and if you could spell it out more clearly for me that would be great. Otherwise, thanks for responding to my question.

Well it looks like your problem is that you cant pass parameters through an Interface message, to give the Attach node a Target. And I’m saying you dont have to pass it, you can just set it as a variable from the thing that is Calling the interface message event. As long as you can get a reference to the target actor, you can store it in a variable on the thing that will be attaching to it, and then call tge interface message. Then it knows what tge target should be because it had the variable set, and the variable is plugged into the Attach node’s Target pin.

Byt this makes me wonder why it has to be an interface message in the first place. Maybe you can trigger this to happen via a different technique that lets you pass references through.

Your problem seems to be that you dont know how to find the child that is going to be snapped to the parent. Is that it?

It’s working. I was missing the obvious. After reading your response I decided rethink my problem. I had the whole thing working using box colliders (see first screenshot) so surely I can trigger that to happen using a line trace. And I did, by sending a message to Interact Door after the line trace finds something. After it finds it (a box collider wrapped around object), the message fires my Interact Door node which is placed inside my object to pick up blueprint. And it didn’t work of course until I changed my collision settings for each box collider. Don’t know if that makes much sense to you without seeing the blueprints but thanks a lot for taking the time to help with this. You got me to examine the whole thing from a different perspective and I now understand much more than I did before about blueprints.

Totally got rid of On Interact interface (second screenshot). No it wasn’t necessary.