Snap-delete for execution nodes in blueprint

right know, it takes a lot of time to simply delete a node because you have to manually re-route the adjacent nodes by hand. That’s like if deleting a line in a script stops it from executing the rest.

Suggestion: Shift+Del not only deletes the nodes but simply snaps together the execution wires of the former neighbours: 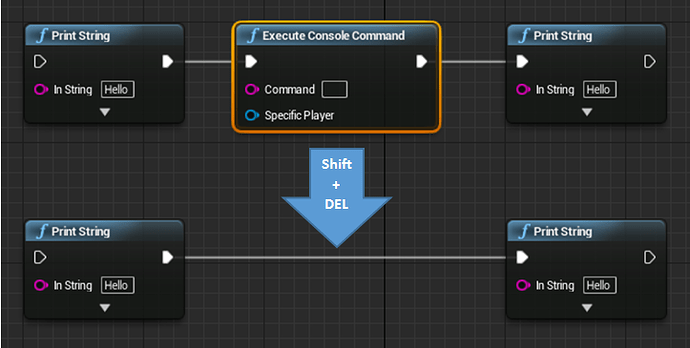 The opposite case would also be very helpful. Currently it’s very awkward to place a node to an existing execution flow. You have to place it there, then manually connect the predecessor and the successor with the input and output pin by hand. 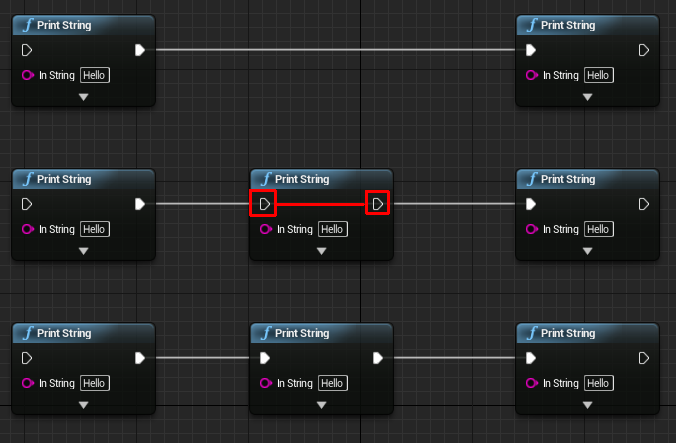 This would be great.

Yeah some of this sort of node utility is present in many other systems such as in Blender, hovering over a line allowing you to insert a node in the flow, shortcuts for dragging lines over connections to break them etc. It has been mentioned a few times in the threads but so far nothing much from the fine folk at Epic on the subject.

If they would at least register this as feature request…

please implement this, if Blender can do it so can UE4

That really sounds useful, another +1 from my side. Might even take a look at it myself; since I wanted to improve drag-a-wire followed by “Paste here” to auto-connect some stuff (no idea when I find the time tho).

…actually, why not make connecting the two the default? Whenever deleting a node in-between, its usually either to get rid of it (like a debug print string) or to reconnect things; and either way it probably wont hurt if the connection is there.

Yes, I also wonder why deleting AND disconnecting is the standard. It’s actually very weird that deleting a node prevents all further nodes from being executed.

I really like this idea! I have entered a feature request, UE-18539, to be considered by the development staff.

Hi there. Any news on this?

you can vote for this feature now HERE: Unreal Engine Issues and Bug Tracker (UE-12271)