I ran into a problem. I cannot use a max speed node for the trigger box scripting as my character doesn’t rely on a blend space. The second you enter the trigger box he slows down but as soon as you press shift he will be able to run again despite the max walk speed being very small.

Even if he still leaves the trigger box, he wont be able to run forever

Just add a condition to the shift input that prevents it from firing if you are in the area. This can be done by set to g a Boolean when the character enters and exits the box. Use this Boolean as the condition for the input check

I’m assuming you want the character to walk when in the box right? Is this a third person project?

ok so the reason shift increases your character back to run/sprint speed is its increasing the max walk speed when you press it, are you resetting the max walk speed on overlap end? this should make the character run again after he has left the box. blocking the shift command if you are in the box shouldnt cause the character to stop moving. can you add some screenshots of all your code so i can help a bit more?

And yes I want him to walk when in the box

Sure Heres a pic 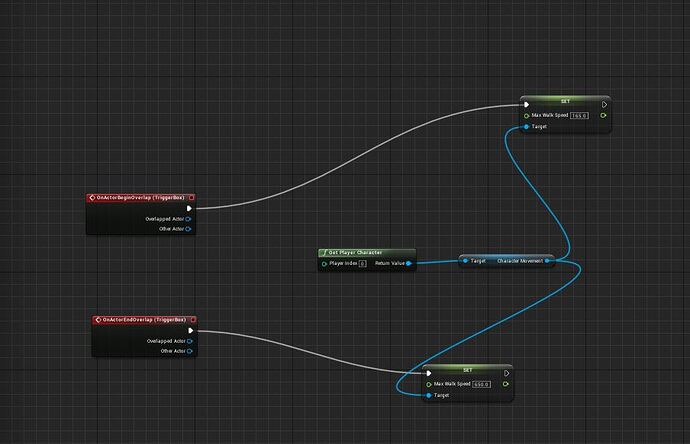 ok well that should defo make your character walk in the box. does it do this?

Create a Boolean variable in the character called “Walking” hook this up to a branch after the shift input action so it does nothing when the Boolean is true and executes the sprint code if its false.

then inside the bp above add a cast to you player character and use the overlapped actor as the wildcard from the on actor begin overlap from here drag out from the cast and set the Boolean to true then set the walk speed.

do the same for the end overlap event but set the Boolean to false then set the walk speed.

this should prevent your character from having its max walk speed overwritten when sprint is pressed.

Let me know if this helps? if not message me and we can talk over discord if you want. @MrRapidTG