Slow download speed, and how I fixed it in 2 steps

Epic Games Launcher downlead speed fix. How I did it in 2 steps.

I had noticed since I got Epic Games Launchers that the downloads seemed much slower than they should. It would average about 1/3rd of my internet bandwidth witch on Centurylink is only 12Mbits/s / 3 = 4Mbits/s. I did some research on the forums, and found a partial fix.

STEP 1:
You need to add the following to your Engine.ini file.
You can find file the ini file in: %localappdata%\EpicGamesLauncher\Saved\Config\Windows
My Engine.ini file was blank. Yours may not be. Do not delete any entries, just add this to the end.

Step 2:
After adding this I restarted the Epic Game Launcher and started my download. Things did seem to download much faster, but after a short time it settled back into its usual pattern of widely varying downlead rates. After much fiddling I discovered that if you turn ON, that’s right turn ON download throttling and set the value to your internet bandwidth (for me 1500KBytes/s) then start your download the speed will stay very near your max. For me about 1400Kbytes/s. Do not set the value to 0. This is the same as turning it OFF witch seems to throttle more that turning it ON.

P.S. I have also noticed that my Centurylink modem will lose its internet connection from time to time. The internet light will turn red then go out. Then about 30 seconds later it will turn back on green and the download will continue. It only does this when I download from Epic Games or Steam. These are the ONLY sites that do this. I download large files all the time for Visual Studio and other things and my modem/router works as expected. I did not think that an app could take control of the Centurylink modem, but?

Does any one know about this? Thanks Harry Smith…

God bless you. I was downloading with 3mb/s and after i enabled throttling i immediately hit 140mb/s

Hey, how many KB/s did you put in the throttling section in Epic Games? Usually I get 2-6 mb/s when downloading games in Epic Games but with UE5 it stays at 500-700 KB/s which is annoying af.

My Century Link line is only 16 mega bit per second at best so I put 1900K bytes/sec into the throttle setting. Try a setting that is just below your internet band width. I still only get 1500K to 1800K bytes/sec download from epic games anyway, but its much better than the 300K to 700K bytes/sec I got with out throttling. Did you create or modify the launcher .ini file with the settings I discus in my post? These setting may or may not make a difference. I found that part in another post, but discovered the throttling part on my own. Harry…

I tried the above solution but still now luck. Can anyone help on this 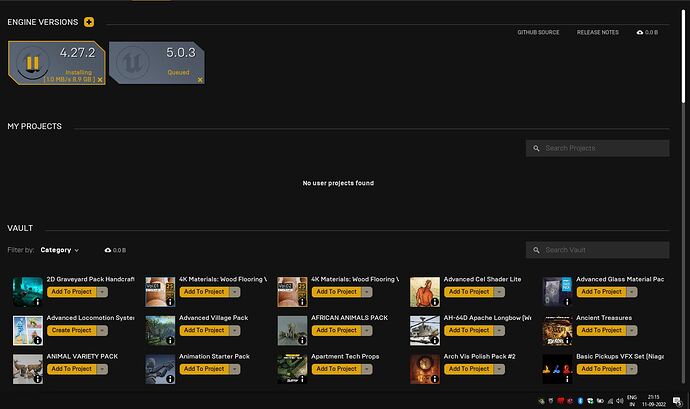 I’m having the same issue, getting <2 MBPS on gigabit internet.

Neither the Engine.ini solution nor the Throttle limit are fixing the issue.

Also, the download manager numbers are all wrong. In the shot below, I’m getting only 1.76MBPS down, while the write activity shows a sustained 550MBPS. 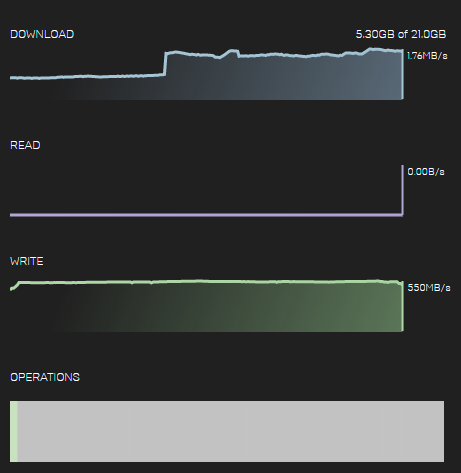 This not only makes no sense, but also does not match Windows Task Manager, which shows a more appropriate 3.0 MPBS disk usage.

Same problem here for me. I’m on gigabit and I’m downloading at 4 mb/s on to a Gen 4 NvME drive. The above solution did not work for me.

Same here. Trying different values for throttling has only made it worse.

I tried this and worked for me:

See if it’s disabled, and then if it is, type: netsh interface tcp set global autotuninglevel=normal

Hey there,
I’m getting the same issue. I have a super fast NVMe drive and 600 Mbps down internet. My unreal 4.27.2 is downloading at ~1MB/s. I have tried all of the presented fixes. I am located in Redmond, WA.

My download starts at 40 MB/s and gradually goes all the way down to 100 KB/s and even 0 KB/s and then stays at around 1 MB/s. It is going to take 5 hours to download.

Thank you for your useful information. This will help me a lot.