I need to create a UI that exists on a plane in my 3D game world. I would like to use Slate, but I don’t know if that is possible for this task. There are previous questions on this topic (Slate render to texture - UI - Unreal Engine Forums and Using Slate UI with Oculus Rift - UI - Unreal Engine Forums), but no answers so far. So I’ll try again: Has anyone figured out if and how Slate can be used for a 3D UI? Or could someone from Epic comment the issue (maybe it is a planned feature)?

If Slate is not suitable for this task, I’ll have to create my own widget library using Canvas or use one of the HTML UI solutions. Are there any other options?

Theres is no 3D transformation yet, but it is planed. You need to make premade 3d or use actor based, but it might colide with other object in world

A premade 3D won’t help me as the UI is very dynamic and can appear at different locations in the world. It also needs to work with 3D output devices such as the Oculus Rift.

By actors colliding with the world, I assume that you mean that the UI could be occluded by other objects. That’s ok, or could be prevented by using a material with disabled depth test.

By 3D transformation, do you mean render-to-texture or something similar for slate? Do you have a source that says it is planned? Thanks!

Slate is hardware accelerated UI so its rendered the same way as 3D, there for it can be transformed in 3D space, similar to 3D transforms in CSS

But there is currently no way to do it without modifying the engine? And no information if or when it would become possible?

There Cohirent UI and Scaleform but they are not free, for 3D transformation in UMG (and UMG it self) you will need to wait, in 4.4 UMG will be experimental

I haven’t found a source that 3D UI will come to Slate with UMG. How do you know, is it official?

UMG will support in world rendering of UI. It’s planned for the 4.5, we’re currently prototyping solutions for it, don’t yet know what constraints there may be, or what features it will support, but… 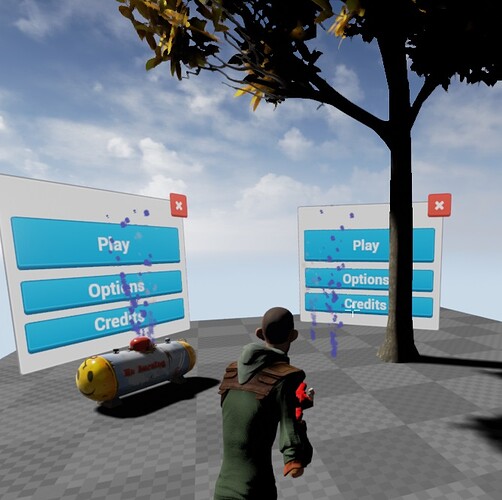 Great, thanks for the update!

I see that the 4.5 preview code is up. Any hint as to where to find the world rendering for UMG/Slate?

Didn’t they say this had slipped to 4.6?

Confirmed slipped to 4.6: UMG - In-World UI? - Blueprint Visual Scripting - Unreal Engine Forums
Not sure where you had heard that though? I tried searching everywhere

So whate about Slate 3d?