I’ve noticed a strange issue when importing skeletons into UE4. The skeleton almost seems to shift the bone hierarchy up one, where bones take the position and size of their parents. The root bone is always at the origin with no size.

I’ve attempted to use UE4.27, 4.26, and 4.25; along with Blender versions 3.0, 2.93, and 2.83. I have also encountered the issue with the Send to Unreal plugin, as well as a traditional FBX import. I have also made sure to exactly follow tutorials about the workflow for Blender to Unreal, but the issue persists. The issue also still happens in a completely new, default project.

The skeleton in Blender: 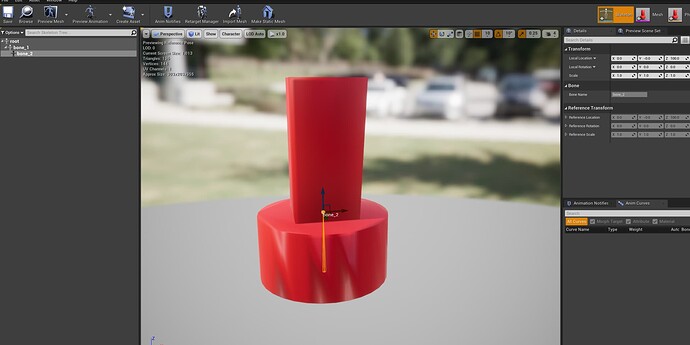 In both images, the last bone named “bone_2” is highlighted, however, in UE4, bone_2 has the location and size of bone_1.

I haven’t noticed this issue before, and have had no issue importing skeletons in previous projects, I hope someone knows why this might happen.

They are just rendered differently by the engine.
They work just as they would in blender…

This is not a difference in visualizing the bones. Looking at the first bone in the chain I have shown, bone_1, it can be seen to have apparently no length. As for working the same in practice, I have seen other tests show different results from the changes in the skeleton. Again, previous projects on my old computer correctly import the skeleton exactly as shown in Blender, not in the strange offset way new projects do.

I’m not sure what you are on about.

The import/export system has worked exactly the same with no changes in the visual what so ever for over 2 years now.
I should know… I developed a plugin for skeletal meshes.

Tail bones display differently in unreal. This doesn’t change how they work - or you’d have so many complaints about stuff not working that the animation forum would be flooded.

That really depends more on the blender file.

Your armature should be called Armature to export as a root bone with the default fbx exporter - which can have been and probably was modified.
As opposed to the engine, which was not changed.

Test behavior.
Make a 1 frame animation that snaps the top bone at 90deg and check that it works in engine - which I can pretty much guarantee will.