I came across some free to use models made with Blender today, fully rigged and what not. I figured since I’ve imported from Blender before, these models would be good to try out while I’m learning UE4 – as in replace the default manekin with something else, because I’ve yet to try that out. However, optimising these models in Blender for UE4 (unit conversion, setting the “export FBX” panel as per the how-to’s I’ve found on the wiki/forum) seems to give me unexpected results.

As I import the resulting FBX into the UE4 editor, I’m always greeted with the animations import, not the skeletal mesh import dialog, which of course results in only the manekin armature being available, which doesn’t work with quadropeds obviously. I took note of parenting the mesh(es) to the armature and making sure there’s only a single armature, but that doesn’t seem to be enough.

Below I’ve screencapped the object hierarchy of this model in Blender. Having not built it myself, I’m rather confused structure-wise about what I should do. Additionally, I’d like to note Blender 2.75 only came out today, so I’m not ruling out the possibility of an internal bug. For additional reference, the model download is http://www.mediafire.com/download/tat2zuoxvoa01fj/TwilightSparkle_1-0.zip 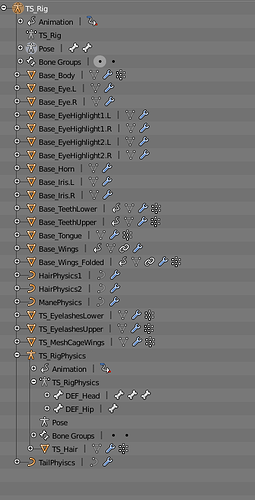 ok you need to read the import log for errors
you have multiple root bones, dupliacate bone names , and some error to a ts-meshcagewings !!!

you mean shape keys and stuff?

if i remember rightly i deleted the TS_RigPhysics (rig) and the other namephysics stuff then when i imported it went ok although it lost the hair/mane/tail , if you want those parts then you’ll have to add them to the normal rig.

not sure about shape keys but UE4 should import blendshapes

ah ok thanks, I’ll try that