I’m trying to import DexSoft’s Castle model into Unreal Engine 4. I’ve used Blender to add my own lightmap UVs to all meshes and set the import options accordingly:

However, when I build my lighting, I still get the message “Lightmap UV are overlapping by 96.5%. Please adjust content - Enable Error Coloring to visualize.”

The file contains multiple meshes and each mesh is UV mapped on its own. Could that be the problem? If so, how do I fix it? Do I have to join all the meshes together?

The file contains multiple meshes and each mesh is UV mapped on its own. Could that be the problem?

if they are all separate objects in blender that shouldn’t cause a problem, if they are all 1 object or you combine them on import then it could. can you post a pic of your lightmap UV in UE4?

I have no idea what model that is, sorry; so with that being said… break it up into smaller, individual pieces. UV map those, redo the pivots, set it to 0,0,0 position, and export. You may find that you have 10+ of the same chunks in the building, so then you only need to perform the actions on one of those, and only need to import the one into the engine.

edit: Simplify it as much as humanly possible. It will make UV mapping and collision generation that much easier, although you will need to “assemble” it all back together in the engine. If you’re going to be re-using the castle in multiple scenes, then I would recommend, and have been experimenting with, assembling the model in a blueprint (even though the BP might not actually do anything), and that way you can just drag/drop the one BP into the scene, and the castle would be pre-assembled.

If this is a good way or not of doing something like this, I have no idea, and would like a professional opinion on it.

if they are all separate objects in blender that shouldn’t cause a problem, if they are all 1 object or you combine them on import then it could. can you post a pic of your lightmap UV in UE4?

Okay, first, here’s the model in Blender. It is split into 30-40 individual meshes, all with their own lightmap:

Here it is imported into UE4. It appears to have turned into a single object: 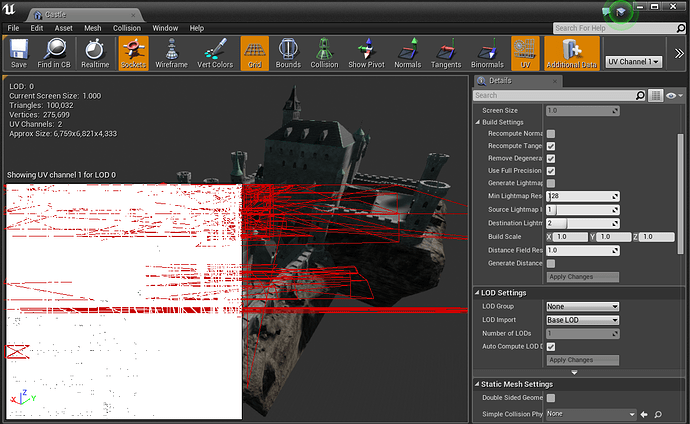 So an export/import issue maybe?

@SaviorNT: All good advice. I still hope that I can at least have multiple, individually UV-mapped meshes in the same FBX model because even with library linking in Blender, having to split it into separate files would make working on the model so much harder

Turn off “Combine Meshes” in the Import Menu, this should solve your problem.
You got now 40 single meshes, select them all und drag them to the Viewport. After this, set the Location to x=0 y=0 z=0

I only see 13 meshes that you need to export in that castle.

etc… Anything that can be duplicated, only export that mesh once. No need to export the entire project.

Also, at some point in the import/export settings, you have “combine mesh” checked.

As far as reassemble, one little trick I learned is to assemble the house/building/castle or w/e, make it all one mesh (combine everything). Center the pivot point to the XY center, Z: 0. Depending on blender, right down these coordinates for the pivot point.

Separate each mesh object, and then move the pivot point to the location above.

When you import into UE4, it makes reassembly of these types of models so much easier

@SaviorNT: I did get your point about deduplicating the meshes and placing instances in the editor, but I still had to know what my options are - all meshes in single FBX file or one mesh per file

The “Combine Meshes” option was indeed the culprit. I had already seen it in the UDK3 docs, but thought I was removed in UE4. Turns out that it’s only available when importing a mesh for the first time. It then exports each mesh in the FBX file independently, solving my lightmap issues.

So here’s my plan of attack: 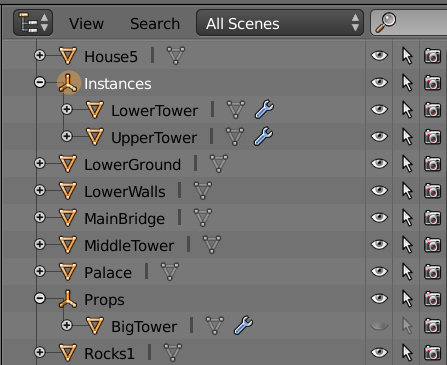 Thanks everyone, problem solved!