Hello, I have the following scene which is made up of a simple wall, duplicated with a lightmap uvs.

There’s a ton of issues there
First off–you shouldn’t construct flat surfaces like walls out of multiple pieces, there’s no benefit of doing that, in UE4 you will get lighting issues because each object will be separate, but also you will have worse performance because each object will increase the number of draw calls. It also increases the number of polygons since you could do the whole wall in one quad otherwise.
Another issue is that you’ve got a bunch of faces that won’t be visible, the top and bottom caps and the back side which contribute nothing and just take up space, also potentially causing visual problems.
For the walls/floor/ceiling you need to have the corners line up exactly and not extend beyond each other. Otherwise, the lighting or shadow on the non-visible areas will extend inside to the visible areas.

Thank you for your answer.
In regards to lining up the walls, I made sure the walls in Maya were lining up in the grids and the coordinate systems set to centimeters.
As for the back faces, I agree but my level is only one apartment and it’s an archviz project so I am not too concerned with the performance. Also the walls two “sideness” makes my work easy but if that’s the cause I will remove them.
So if I cannot get a smooth wall with multiple lining up, that would make the level designing or prototyping work time consuming.

except the ceiling, I lined up everything perfectly so no object is moving pass others. So all the walls in the scene are touching the floor and nothing is scaled in unreal. Regarding the shadow bleeds I saw that happening so I broke down the ground to smaller segments and that helped with the bleeds.

I initially created single piece walls for each segment and I had to do light-map and texture UV layouts for each wall. In the end when I wanted to modify something small I had to create new walls. So after that I tried using small piece walls which as far as work flow it’s much faster for me BUT I guess it comes down to preference.

so you are saying there is no way to get rid of the artifacts using small segments ?

There’s no way to get rid of that issue with the lighting–it has to do with smoothing that’s applied to the mesh which is only processed on each one individually and so there will be variations in the color.

Here is the solution to this problem 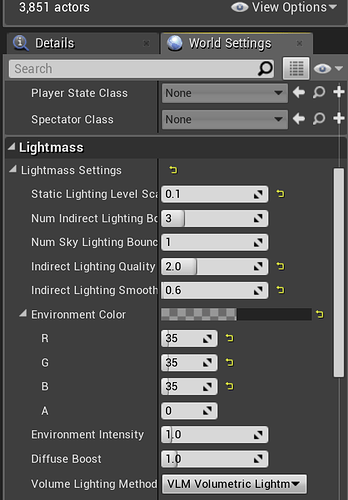