Hi guys, I’ve been having no clue how to get this emitter to display on Android, although it displays correctly in the Mobile/Android preview. I have to admit that I am working with the UE 4.11 preview 4, which not supposed to be stable. Anyway, I think the case is too simple to have an engine bug involved.

I’m trying to achieve a beam between two points in the space. The material is really as simple as this:

The emitter itself incorporates these modules: 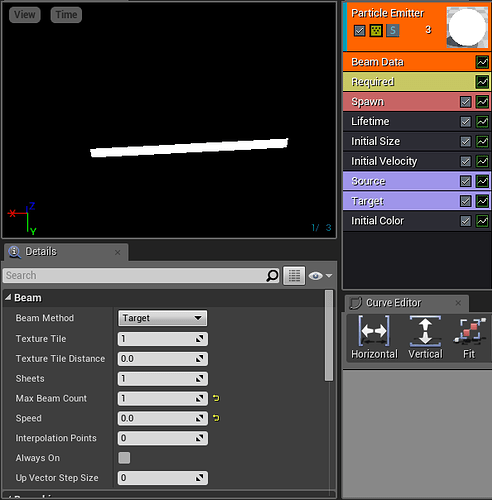 And is supposed to look exactly as on the preview.

It displays in-game on PC, it displays with the editor android preview, but it doesn’t display on the phone.

Any idea what can be wrong?

Okay, perhaps it’s more complicated. Maybe someone could think of an alternative solution? I used cable actors earlier, they did the job well, but as they were many in the scene it rapidly dropped the FPS.

i’m having the exact same problem with a ribbon particle effect on android, displays in editor in mobile preview and android preview but doesn’t display on device and i’m using 4.11, it must be an engine bug, cause my setup is pretty simple I’ve checked everything and it technically should work, the only way I could kindof get it to work was to create a separate actor and attach the particle system to that then add it as a child actor to my character blueprint. but even with that workaround the particle effect seemed to only show up randomly and not every single time the character was spawned. any help would be appreciated, thanks.

Also have problems with this. I copied a particle, changed its color to blue, and that particle won’t show up nomatter what I do. It is exactly the same as a particle that works.